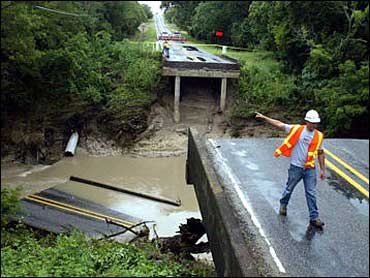 At least two people died as thunderstorms spewed more than a foot of rain in parts of north Texas, flooding homes, knocking out power and washing out a bridge south of Dallas.

A man's body and two vehicles were found late Thursday in a flooded creek downstream from a collapsed bridge in the Ellis County town of Ovilla. Fire and rescue crews continued searching the creek, and County Judge Chad Adams said they expected to find more dead.

Adams said the bridge was swept out as the severe storms moved through the Dallas-Fort Worth area early Thursday. Some parts of the region received more than 13 inches of rain from the storms that began Wednesday night.

In the south Dallas suburb of Lancaster, city officials declared a local disaster to help get state and federal relief after flooding damaged as many as 200 homes.

Looking at the remnants of her home, flood victim Esther Williams told CBS News Correspondent Jim Acosta, "Everything is just totally destroyed. There is nothing worth salvaging."

With creeks still swollen and soil soaked, residents across the region braced for the possibility of scattered showers.

"If we get any precipitation, it's going to aggravate all of the water problems that are going on," said Gary Woodall, meteorologist with National Weather Service.

In Dallas, at least one death was caused by the weather Wednesday night when a motorist in a pickup truck knocked over a utility pole. Live wires fell on the truck and electrocuted the man, authorities said.

An estimated 45,000 north Texas customers were without electricity at the peak of the storms, said utility spokeswoman Eliza Anderson, but most power had been restored by late Thursday.

Lancaster officials evacuated several neighborhoods and estimated there were about 20 high-water rescues, some by boat.

"I don't really have anything to compare it to," said city spokeswoman Opal Robertson. "We haven't had this much rain in that short period of time."

It was the second flood in about a month at the home of Fred and Eileen Odom and their five children. Their 13-year-old was sprawled on the carpet reading around midnight when he noticed his elbow was wet.

A short time later, the carpet was sopping and floodwaters were ankle-deep on the kitchen linoleum as the Odoms put up valuables and gathered their children in the center of the house. Outside, water knocked over a heavy basketball goal and covered the wheels of a minivan.

Lancaster's police station also flooded and a leaking roof collapsed the ceiling of the 911 call center. Calls were rerouted temporarily.

In southern Dallas County, authorities received more than 80 calls for high-water rescues, Sgt. Don Peritz said. It was unclear how many people were rescued.

In the Fort Worth suburb of Haltom City, crews rescued a 16-year-old boy who had been swept into a flood-swollen creek.