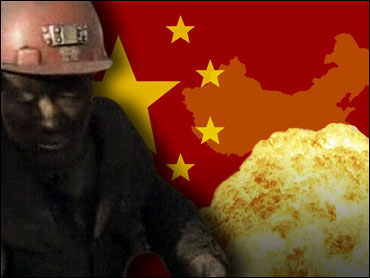 A gas explosion tore through a coal mine in northern China on Saturday, killing 15 people and trapping another 114 nearly a third of a mile under ground, central government authorities said.

Another 399 people at the Xinxing mine in Heilongjiang province managed to escape after the 2:30 a.m. explosion, the State Administration of Work Safety said in a statement.

China Central Television reported that 15 were dead and the others were trapped about a third of a mile (500 meters) under ground. The report said the cause of the explosion was still not clear.

A man answering the phone at the mine said an unknown number of people were injured in the blast. He did not want to give his name, as is common among Chinese officials.

The mine is run by one of China's top 520 state-owned enterprises, according to the Web site of its owner, the Hegang branch of the Heilongjiang Longmei Holding Mining Group. The site says the Hegang branch has more than 88,000 employees.

The mine is located near the border with Russia, about 250 miles (400 kilometers) northeast of the provincial capital, Harbin.

China's mines are the world's deadliest, with unregulated operations accounting for almost 80 percent of the country's 16,000 mines.

The closing of many small, dangerous mines halved the average number of miners killed to about six a day in the first half of this year, the government has said.

Most accidents are blamed on failures to follow safety rules, including a lack of required ventilation or fire control equipment.

A blast at the Tunlan coal mine in northern China's Shanxi province killed 77 people in February, China's worst industrial accident in a year.