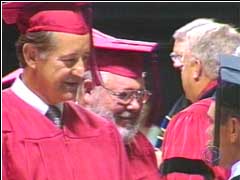 Lubbock, Texas was once a town unified by tragedy. Saturday afternoon it celebrated a commencement filled with joy.

Three decades after a tornado devastated the town and forced the cancellation of their commencement, members of Texas Tech's Class of 1970 held their long-delayed graduation ceremony.

As CBS News Correspondent Kendra Farn reports, for many it was their first time back to their alma mater in 30 years. They came back carrying, perhaps, a little more weight and a little less hair but more pride than ever.

"We really weren't that charged up about it at that time, now it means a lot after 30 years," said Denise Mills.

Mills remembered the dark day in 1970 as if it were yesterday.

It was May 11th when that tornado ripped through this west Texas town, killing 26 people and injuring 500 others.

"When I got up off the floor we only had walls from the waist down, no front wall at all, the roof, it was gone," said Mills.

The school's 44th commencement was canceled that week because the coliseum was being used as a shelter for those left homeless. That disappointed some. For others, however, the tragedy struck closer to home.

"My brother died in that tornado 30 years ago. Technically, that's why I missed my graduation," said Dwayne Cox.

But whatever their memories, when the familiar strains of graduation music began were heard Saturday, yesterday's graduates and today's senior class marched together.

The class of 2000 in black, the class of 1970 wearing red, the younger generation gladly sharing the stage.

"I think we all will feel the same thing and that is somehow pride and a sense of accomplishment and also unity between them and us," said Katrin Kamm, Class of 2000.

As for the lessons the Class of 1970 learned, one was the power of Mother Nature.

"Glad the weather's nice. We checked the weather pretty good before we left this morning," said Mills.