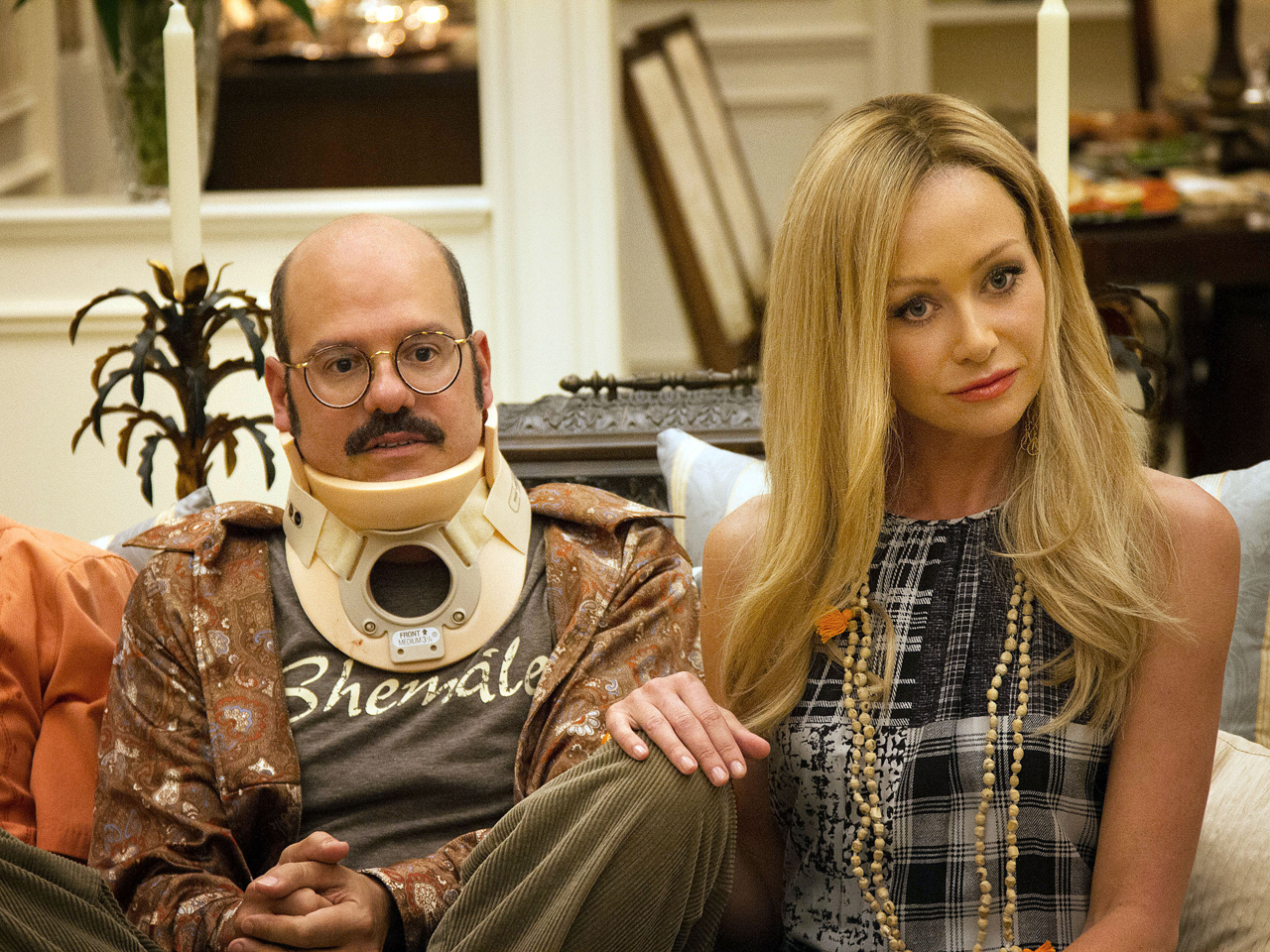 It happened all right. After years of clamoring from fans and rumors firing them up while the cast hung on for a green light, "Arrested Development" has risen from the dead with 15 half-hours premiering en masse on Netflix on Sunday at 3:01 a.m. ET.

"Arrested Development" is the cock-eyed comedy blessed with a king's ransom of talent and the twisted vision of its mastermind, Mitch Hurwitz, that aired on Fox for three seasons as a cult favorite, then was canceled for low ratings -- and maybe because it befuddled everyone who wasn't hooked on its lunacy. (Those original three seasons are available for streaming on Netflix, too.)

"I think the show scored some 'cool points' for dying before its time," says Cera. "But there are still a lot more places for it to go."

Yes, "Arrested Development" died young with a beautiful, if funny-to-look-at, corpse. But its fans weren't ready to bury it. And said so.

"Clearly a lot of people DIDN'T like the show," Jason Bateman allows, "so I guess all we were hearing from were those who do -- and that happens to be a brand of people who are not afraid of speaking their minds."

"I think it's new at every opportunity," says Cera (who plays Michael Bluth's straight-arrow son), "while retaining the show's original heart."

The new Netflix season takes the form of what you might call an anthology as it updates viewers, character by character with each episode, on the Bluth family -- that once-wealthy, now-broke and at-each-other's-throats clan squabbling in Newport Beach, Calif.

A wicked homage to the scandals of Enron and Tyco and a loopy foreshadowing of the 2008 Wall Street meltdown, "Arrested" premiered in 2003 as a send-up of high-end vanities, greed and corruption as displayed within the Bluth family circle.

Besides de Rossi, Cera and Bateman, the cast of "Arrested" Redux brings back Will Arnett, Alia Shawkat, Tony Hale, David Cross, Jeffrey Tambor and Jessica Walter, who reconvened in a strategic yet catch-as-catch-can fashion.

"There was no reality where we could get everybody for a full 7- or 8-month period," explains Hurwitz. "That gave birth to the form we came up with for the new series."

The 15 episodes dwell on individual characters during the six-year span from when the series was canceled in 2006 up through 2012. That structure was supposed to make it simple to book each actor for an isolated shooting schedule.

Then Hurwitz took his creativity another step. Since all the episodes are happening simultaneously, he couldn't resist including crossover appearances from other actors in each episode. He wanted characters and story lines from different episodes to intersect. But his ambition made it all the trickier getting all the actors he needed in place for any given episode.

"In a quarter of the scenes, someone is green-screened in," says Hurwitz, who goes on to concede that what began as a solution to a problem of logistics inspired him to create new problems for himself. For instance: "If two characters are having a conversation in one of those characters' episodes and that character's life changes, then in the other character's episode you show the other side of the conversation and the result of it on THAT character."

The overall effect is a sort of hypertext array for the 15 episodes.

"Mitch made it a choose-your-own-adventure season, in that you can watch any episode out of order and it makes sense but, depending on which order you watch them, the series kind of tells a different story," says de Rossi (who plays spoiled materialist sister Lindsay).

Not that "Arrested Development" has ever chosen the simple or obvious path. From the start, it was dense, convoluted and layered, packed with sight gags, self-referential jokes, flashbacks, hand-held cinematography with run-on sequences (promoting improvisation to enhance Hurwitz's scripts) and, of course, its droll, documentary-like narration by Ron Howard, one of the show's executive producers.

On Fox, the show won six Emmys and a Peabody as well as critics' love while always fighting for its life in the ratings. But Hurwitz is philosophical about the obstacles his show has faced. They seem to have given him license to obliterate boundaries that otherwise would have hemmed him in.

"All of the limitations," he says brightly, "are great creative opportunities."

That applied to the new episodes' shooting pace, which Arnett describes as "run-and-gun and crazy."

"But it really worked to our advantage. It was 'OK, get over here, here we go,' and we were right back into it," says Arnett (who plays Lindsay and Michael's older brother, Gob, a preening, mediocre stage magician). "After working together on the series before, all of us just kind of knew what we're doing. There's an implicit trust there. I know that sounds corny, but it's true."

This is a mutual admiration society: The cast heaps praise on Hurwitz, who volleys it back at his actors. And they all join in celebrating "Arrested" viewers, but for whom the show would be long dead and forgotten.

"There are way, way more fans of 'The Big Bang Theory,'" notes David Cross (who plays Tobias Funke, a quack-psychiatrist-turned-actor-wannabe). "But they're not as passionate as 'Arrested Development' fans -- because there's more to be passionate about."

"In either a conscious or unconscious way, our audience thinks -- and rightly so -- it's THEIR show," says Jeffrey Tambor (who plays jailbird-patriarch George Bluth Sr.).

"A lot of people have told me over the years that they would build friendships around the show," Howard adds. "They would judge first dates on whether that person likes 'Arrested Development' or not. It was a means of evaluation."

Does that mean there might be children walking around today whose parents were united by "Arrested Development"?

"I think that's fair to assume," Howard says with a laugh.