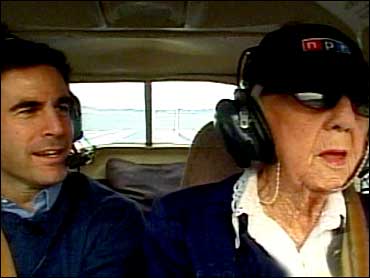 She's had an engine failure in mid-flight, had to make emergency landings in fields, and once made it back to her airport under minimal power -- but such mishaps are to be expected when you've spent the equivalent of 6-1/2 years in an airplane. Evelyn Johnson's seen just about everything, and most of it from the sky.

You'll find Johnson, 94, at a tiny airport in Morristown, Tenn. Residents affectionately call her "Mama Bird," and she is truly the queen of the sky.

She says, "You get up above all the cares and troubles and worries that are there on the ground. You forget all about them while you're up there."

Johnson has logged more flying hours than any woman in aviation history. At the time of her interview with The Early Show correspondent Jon Frankel she boasted, "I've got 57,568 right now. You fly everyday."

She took Frankel for a buzz in the skies she's flown for nearly six decades.

Looking down at Tennessee from up above, she says, "There's always something new, something changing. It's gorgeous."

From helicopters to military planes, to single engine Cessnas, Johnson has flown almost every type of aircraft, in a career and hobby that she had never really planned.

"One Sunday morning, I was ready to go to church, but I was a little early to start so I picked up the paper, and there's an ad in the paper that says 'learn to fly,'" She recalls. "Took my first flying lesson. It was love at first flight, and I've been flying ever since, and that was Oct. 1, 1944."

And as a flight instructor, Johnson has shared her love with thousands of others. "I quit counting how many soloed after 3,000, that was a long time ago, so I would say over five," she says.

Adele McDonald, a professional pilot who learned from Johnson, says about her teacher, "She's got it all whittled down to the most important things and she's not there to make herself look good, she's there for you to learn. You couldn't ask for a better instructor."

Johnson has given up teaching but she still administers pilot tests -- and this old gal's no pushover.

"Oh, there's been plenty of people that have not passed," she says. "But I don't know any of them that's gotten mad at me. I don't fail them. They fail themselves. They've got to get busy and straighten out whatever's wrong."

When she's not in the air or giving tests, she's at her day job, manager of the modest Morristown airport.

She says, "A lot of people retire and sit down and watch the grass grow. And that's bad. You should have an interest of some kind and stay busy."

But "Mama Bird" isn't ready to settle into her nest yet...

On a humorous note, Johnson was concerned that Frankel did not shoot the interview too late, because she didn't want to have to drive home afterward in the dark.