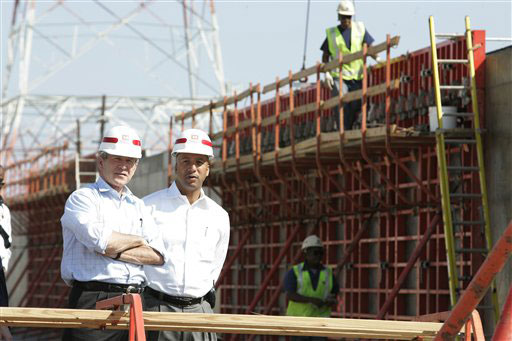 Arizona State tailback J.R. Redmond was suspended by the NCAA for Saturday's game against Oregon as the result of a bizarre situation that involved his marriage to a student who worked part-time in the Sun Devils' athletic department.

Redmond must pay $418 in cellular telephone bills and $173 for a plane trip to Las Vegas plus perform 20 hours of community service. The money is to go to charity.

Redmond subsequently has filed for divorce from the woman, whose name was not made public by the university. The woman reportedly is seeking a share of Redmond's future earnings as part of the divorce settlement, athletic department officials said.

Redmond's future earning potential is considerable, since he is a top NFL prospect.

Arizona State's appeal of the one-game suspension was denied by the NCAA on Friday, which led to the situation being made public.

Redmond did not accompany the team to Eugene, Ore., but would have flown there and played if the appeal had been accepted.

The university, in consultation with the Pac-10 Conference, reported the matter to the NCAA when the situation came to light earlier this week.

"Concerns arose related to who is permitted to provide benefits to a student-athlete," ASU athletic director Kevin White said in a statement. "Therefore, the conference and the institution reviewed the direct relationship of the parties involved."

"Based on the institution's information, the NCAA determined that the benefits did not come from an approved source."

According to the university's report to the NCAA, Redmond developed a relationship with the female student who was a part-time athletic department worker, and she allowed him to use her cellular phone. After he made several calls, she told him that what he had done violated NCAA rules and the only way he could rectify the matter was to marry her, according to the report.

Athletic department officials said Redmond married the student on Aug. 25, and the couple flew to Las Vegas for the honeymoon.

The university investigated a report that the woman had done a paper for one of Redmond's classes. While she may have typed the paper, there was no evidence she composed it, and it wasn't part of the violation that resulted in the NCAA penalty, athletic department officials said.

Redmond, a senior, was mentioned as a possible Heisman Trophy contender before the start of each of the last two seasons but has been slowed by injuries. He is fourth on Arizona State's career rushing list with 2,684 yards and 28 touchdowns in 3 games.

This season, he has rushed for 739 yards, averaging 5.1 yards per carry. Last week, he carried a career-high 35 times for 165 yards in the Sun Devils' victory over Washington State.

The athletic department said Redmond would not comment on the situation under advice from his lawyer because of the pending divorce proceeding. Redmond missed a practice this week because of a migraine headache.