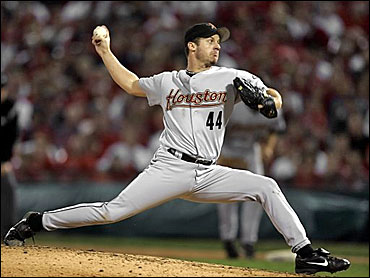 No wonder the celebration was so sweet. They never had one before.

The Houston Astros made it to their first World Series after 44 seasons, owing it all to Roy Oswalt, who took his team's hopes, dreams and gritty resolve and pitched them past the St. Louis Cardinals 5-1 Wednesday night.

Even with the NL trophy firmly in their grasp, they could hardly believe it.

"It's been a long time, you know. I'm not greedy, I'm not selfish, just wanted to go one time," Craig Biggio said. "I can't tell you how happy I am, it took us a long time and we've got 5 million people in Houston who are very pumped up right now."

His teammate of 15 years, Jeff Bagwell, echoed those sentiments.

"Towards the end of my career, I didn't want an opportunity like this to go by," said Bagwell, a prolific slugger slowed by shoulder injuries the past few years.

Coming off a crushing loss in Game 5 of the NL championship series at home on Albert Pujols' stunning homer, the stubborn Astros refused to be shaken. They jumped to an early lead behind Biggio and Jason Lane, got perhaps a little help from the umpires and watched Oswalt shut down St. Louis for seven innings in earning the series MVP award.

Now that this wild-card team has its first NL pennant, the Astros will travel to Chicago to take on the AL champion White Sox in the World Series, which begins Saturday night.

Cameras flashed all over Busch Stadium as Dan Wheeler got Yadier Molina on a flyball for the final out.

League champions for the first time, the Astros rushed to the mound to celebrate, bouncing in unison before heading to the clubhouse for a more raucous party.

Houston had been 0-5 with a chance to clinch the NLCS. This time, the Astros would not be denied.

"It's unbelievable, I can't even describe it," Lance Berkman said. "To be a big part of bringing the World Series — the first World Series ever — to Houston is just tremendous."

For St. Louis, the loss marked the end of the season for the team that led the majors with 100 wins. It also was the final game at Busch, scheduled to be demolished by a wrecking ball to make room for the city's new ballpark.

"We were ready to play, but the guy pitched an outstanding game and shut us down," Cardinals manager Tony La Russa said.

After the final out, St. Louis fans stood and applauded, then chanted "Let's Go Cardinals!" The video board played highlights of great Cardinals players and moments, featuring Ozzie Smith, Mark McGwire and even broadcaster Jack Buck.

The Astros won this rematch in six games after losing last year in Game 7 at Busch. Thanks to Oswalt, it didn't go that far this time.

"We absolutely had to have that performance, and he gave it to us. It was tremendous," Berkman said.

Roger Clemens did his part — and Andy Pettitte did, too — after both came home to pitch in Houston.

Bagwell, limited to pinch-hitting duty lately following surgery, even delivered a speech to his teammates before the game, imploring them not to give up.

"It was worth the wait," said Clemens, who has put off retirement twice already. "Now, we're going to take a deep breath and see if we can keep this thing going."

So while the Fall Classic is headed to the Windy City for the first time since 1959, Texas will get its first crack ever. Folks in the Lone Star State like things big, and it doesn't get any bigger than this in baseball.

Born in 1962 as the Colt .45s, the Astros didn't make the playoffs until 1980 and didn't win a postseason series until last year.

Nolan Ryan, J.R. Richard and Mike Scott highlighted some stingy pitching staffs the called the mammoth Astrodome home, but they couldn't carry Houston to a pennant.

Not until Pettitte and Clemens signed to join Oswalt in a stellar rotation did the Astros get over the hump.

And on the night it clinched the NLCS, Houston didn't even need to use Brad Lidge, the All-Star closer who gave up Pujols' two-out homer in the ninth inning Monday night that sent the series back to St. Louis.

Oswalt, who also beat Mark Mulder in Game 2 at Busch Stadium, gave up only three hits and struck out six, improving to 4-0 in his postseason career.

By closing it out Wednesday night, the Astros gave themselves a choice of Clemens or Pettitte to start Game 1 of the World Series on full rest.

The Astros became the first team to win a pennant after dropping 15 games under .500 since the 1914 Boston Braves. Now, they'll take aim at something else: becoming the fourth straight wild-card team to win the championship.