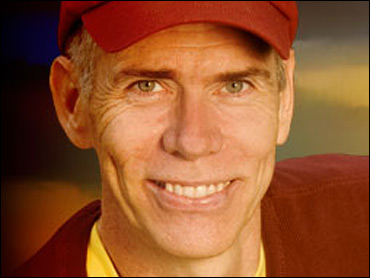 The run for the money is all over for Dan Barry, the scientist and former astronaut who was booted out of "Survivor: Panama — Exile Island" after a 24-year-old La Mina tribemate said his ouster would improve the tribe's odds of victory.

"This is a young people's game right now," said Austin, a novelist and model from North Carolina, making his ultimately successful pitch to Dan's until-then ally, Terry, a 46-year-old American Airlines pilot and retired Navy fighter pilot. "You know we can take you a lot farther in this than (Dan) can."

It wasn't what Dan expected — he'd predicted a tie — he and Terry sticking together, taking sides against Austin and Nick, a 25-year-old waiter from Arizona who hopes to become a lawyer.

on The Early Show Barry told co-anchor Harry Smith he was sorry to go home, and felt let down by his former ally.

"I was disappointed in Terry, that's for sure," Dan said. "In 'Survivor' you can't always count on your buddies staying your buddies, but I thought he was strategically smarter than he turned out to be."

When he failed to bring his team to victory with the giant puzzle, it was another nail in the coffin. As a former astronaut, he admits, it should have been a piece of cake.

"Hey, I am great at solving puzzles, but I couldn't do it last night. And sometimes, you know, you just have a day like that," he told Smith. "You put together 12 or 15 days with no food and hardly any water and not a whole lot of sleep and, bang, some of those scopes go out the window."

There's no doubt the lack of food took its toll. Barry said he lost 32 pounds over 15 days and a , shown only on The Early Show, revealed how serious the situation had become.

I was walking back and forth from there and I'm out of breath. The last couple of days I find the smallest tasks leave me kind of out of breath. It's amazing, just walking around somehow just saps your energy. I feel a little out of breath there and I decide to sit down for a minute. It has been tough for me. Starvation is no pleasant thing and that's exactly what we're undergoing here.

Smith wondered whether Barry had made a mistake by forming an all-boy alliance, but the castoff said it was actually the right thinking.

"I think that that was a pretty good move, actually, because there were four boys and there were three girls, and it could have easily gone the four young ones against the three old ones," he said.In spite of the hardships, Barry said he fully appreciated the beautiful surroundings.

"I loved that place. It was so beautiful," he told Smith. "Every morning it became a saying around camp. I would get up and say, 'Another beautiful day in paradise.' I saw two new species of birds every day. The iguanas would come up to the fire and you could just pet them. They hadn't seen people. It was completely back to nature."

As to why an astronaut, having completed four spacewalks, would want to experience "Survivor," Barry says he saw it as a very different kind of challenge.

"When you do spacewalks and you are an astronaut, you have a thousand people supporting you," he said. "They help you every step of the way. They ensure your success. I wanted to see how it would be when you don't have that kind of backup. What was it going to be like?"

Perhaps a moment of adulation from Nick, earlier in the game, helped lull Dan into a sense of security.

Paired together on a raft in search of something to catch and eat — a mission without reward — Dan let slip the fact that he's an astronaut, news that stunned his fishing buddy.

"I never thought I'd even meet an astronaut, never mind live with one," Nick said later. "I mean, the guy's looked at the earth from space."

As for Casaya, we may already see some foreshadowing of things to come, and it's not looking too good for Shane.

The 35-year-old Los Angeles entertainment products marketer, who's said he is good at manipulating people without having them feel resentful, misfired when he attacked tribemate Danielle for her earlier move in swinging the vote to throw out Bobby.

"We made the wrong decision," said Shane, training his discontent on Danielle, a 24-year-old medical sales rep, athlete and former model. "We made that decision because of your personal feelings, period."

A no gain moment for Shane, as the next morning the women of Casaya got up early, plotting against him, with Danielle branding him "a lunatic."

Another Casayan says he's pretty sure that Shane's days are numbered.

"Unless (Shane's) somehow able to find a way to apologize to the girls and say, 'Look, I really didn't mean it,' I feel like that guy is going to go home," says Aras, a 24-year-old yoga instructor from California.

Apology? Well, we'll stay tuned for that one.