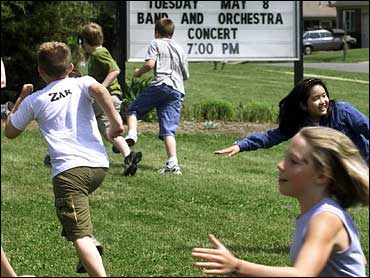 Close-up photos of Eros, the first asteroid to be orbited by a manmade satellite, show that it is covered with craters, sprinkled with boulders and slightly yellow in color.

The images from the Near Earth Asteroid Rendezvous (NEAR) spacecraft also suggest that Eros is a solid rocky body that may have once been part of a larger object, such as a moon or planet.

"Eros has an ancient, heavily cratered surface," Andrew Cheng, chief project scientist for the NEAR mission, said Thursday at a news conference. "There are also tantalizing hints that it has a layered structure, as if it were made up of layers, like in plywood."

Such stratified features, said Cheng, could occur if the asteroid was melted while it was part of a planet, but the scientist said it was too early to draw any final conclusions.

There are bright splashes of lighter-colored material on the asteroid that are still not identified, but scientists said it could be subsurface material ejected from impact craters.

Eros also has a large groove, rather like a deep wedge, gouged out of the middle of its potato shape. The groove, which researchers called a "saddle," has large peaks on two sides. The interior of the saddle is smooth, suggesting it is a fresh feature or that slumping of soil has covered evidence of cratering.

NEAR slipped into the orbit of Eros, named for the Greek god of love, on Valentine's Day and scientists are just starting to analyze data being collected by instruments aboard the spacecraft.

Eros is a space mountain, 21-by-8-by-8 miles in size that orbits the sun. It currently is about 160 million miles from Earth.

NEAR is orbiting about 200 miles above the asteroid, but over the next few months the spacecraft will slowly be brought closer and closer to the surface of Eros.

A radio science experiment that tracks the gravitation pull of Eros by measuring signals from NEAR indicates the asteroid has a density of about 2.4 grams per cubic centimeter, about like the Earth's crust. Water has a density of 1.

Don Yeomans, a Jet Propulsion Laboratory researcher and chief of the radio science experiment, said Eros' gravitational tug is so light and the asteroid's shape is so irregular that it was "very tricky" to maintain NEAR in its orbit.

"If we don't watch it, it (the spacecraft) could smack into the surface or wander off into space," Yeomans said.

Because of Eros' slight gravity, NEAR is orbiting the asteroid at a speed of just 2 mph. A spacecraft orbiting Earth typically travels at almost 7,000 mph.

"If someone on Earth weighed 200 pounds, they would weigh about two ounces on Eros," said Yeomans. "If I could jump three feet on Earth, I could jump a mile on Eros and almost go into orbit."

A spectral experiment, which analyzes minerals based on the spectra of reflected sunlight, indicates that most of Eros' surface is pyroxene and olivineminerals that are very common on the Earth and the moon.

James Bell, a Cornell University researcher, said the minerals originate from molten rock, but it is not known whether the melting occurred as the asteroid formed independently in space, or while the space boulder was part of a bigger body that had volcanism.

This may be answered when NEAR's orbit is lowered later this year and scientists get closer, more detailed data about the asteroid, said Bell.