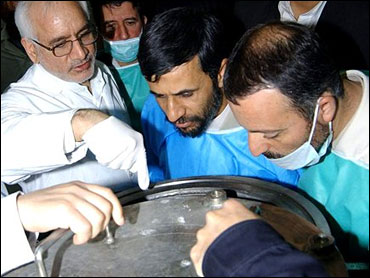 By Sheila MacVicar with Farhan Bokhari in Islamabad and David Martin in Washington. Additional information from the Assosicated Press.

Iranian President Mahmoud Ahmedinejad issued a warning on Wednesday to major world powers, saying they could not deprive Iran of its right to nuclear technology by issuing U.N. resolutions.

But the President refused to say what new progress Iran had made in its efforts to master nuclear technology and uranium enrichment, telling a news conference in Teheran "you will have good news soon, God willing."

In January, Ahmedinejad announced that 3,000 additional centrifuges, used to enrich uranium, would be installed by May of this year at the underground enrichment plant at Natanz.

The U.N.'s nuclear watchdog, the International Atomic Energy Agency reported this February that two cascades linking 164 centrifuges had been installed at the underground facility and another two cascades were, at that time, under construction, for a total of nearly 700 centrifuges. IAEA inspectors returned to Natanz last week and work there has been on-going. Negotiations, described by diplomats as 'highly sensitive' are underway to get Iran to agree to additional, and continuous monitoring using remote cameras controlled by the agency.

(AP)
Natanz is described by some diplomats as 'Iran's nuclear fortress.' Satellite imagery shows an above ground pilot plant, and a concealed entrance to the vast, and still, mostly empty enrichment hall, located more than seventy feet underground and designed to withstand aerial strikes. It has the capacity to hold more than 50,000 centrifuges. Iran kept the existence of the Natanz facility, and the extent of a twenty year covert effort to acquire nuclear technology, secret until they were revealed by an opposition group in 2002.

Iran insists it is interested in nuclear technology only to produce electricity. While acknowledging Iran's right to the peaceful use of nuclear energy, governments – including the U.S., those of Iran's neighbours, Europe and Russia – remain very concerned that Iran intends to covertly build nuclear weapons. Iran has defied U.N. Security Council resolutions which demand that it suspend all enrichment activity and co-operate fully with the IAEA. The IAEA, in a recent report to its' Board of Governors, says that Iran has 'continued to operate single machines, as well as the 10, 24 and 164 machine cascades' at an above ground pilot plant.

Sources familiar with the Iranian program told CBS News that although new centrifuges had been installed, they were not yet operational. Nuclear fuel for enrichment at the underground plant remains under IAEA seal, and no enrichment has been attempted or taken place.

In spite of the installation of additional centrifuges, CBS News has learned that neither the CIA, the Defense Intelligence Agency, nor the Director of National Intelligence have changed their estimates of when Iran could have a nuclear weapon. The time frame most often mentioned is 2012-2015. And senior diplomats, security experts and officials familiar with investigations by the U.N.'s nuclear watchdog into the Iranian program have told CBS News that Iran faces a number of technical difficulties in expanding its nuclear program and remains five to ten years away from becoming potentially armed with nuclear weapons.

In an interview with NPR in September, 2006 (after Iran had begun to operate the pilot enrichment facility), the Director of National Intelligence John Negroponte characterized the U.S. assessment this way: "This is a judgement that was formed over a period of time based on all sources of intelligence that we have, and I think those basic pieces remain in place today, both the determination to acquire such a capability and the efforts that are underway to achieve that."

The head of Israel's foreign intelligence service, the Mossad, has said that his country believes that Iran could have a nuclear weapon by 2009, an assertion Meir Dagan repeated in Dec. 2006. Ambassador Negroponte, asked about the Israeli estimate, replied, "I think that sometimes what the Israelis will do, and I think that perhaps because it's a more existential issue for them, they will give you the worst-case assessment."

Other analysts say that only if Iran were able to resolve all of it's considerable technical difficulties, it might be able to produce enough fissile material for a single nuclear weapon by 2009.

A Pakistani official, familiar with the Iranian nuclear program and speaking to CBS News on condition of anonymity because of the sensitivity of the subject, said Iran remains far away from a 'stable nuclear weapons program.'

"Even if Iran produced its first bomb, that in itself can not qualify it to become a nuclear power," said the official. "It's one thing to be able to make a bomb or two. The essential point is, how far can you sustain that effort. In Iran's case, a nuclear test would not prove that Iran has become an unqualified nuclear power. It would then have to demonstrate that it can keep up the effort."

But Iran's attempts at enrichment have been plagued with problems at almost every stage, and it is not clear how much progress Iran has made towards resolving those problems

One western diplomat familiar with the Iranian program has described the yellowcake produced by Iran (an intermediate and necessary step in uranium processing) as 'crap' and 'full of impurities'.

The pilot Iranian centrifuge facility for enriching uranium still does not operate smoothly after more than a year, and a number of U.S. officials have confirmed in recent months there are continuing technical problems. Iran has been unable to run the small number of centrifuge cascades at the above ground complex close to the huge underground facility at Natanz without frequent breakdowns and even centrifuge failures.

Iran claims to have enriched uranium to 5% (a level far below the minimum 85% required for highly enriched, or weapons grade uranium). IAEA tests have confirmed a maximum enrichment of only 4.2%

The problems are beyond the issue of Iran's technical competence in the enrichment process. In January 2007, Iranian Vice President Gholamreza Aghazadeh, who heads the Atomic Energy Organization of Iran told reporters that in April 2006, shortly after Iran began to install and operate centrifuge cascades at the pilot plant, 50 centrifuges exploded during a test.

The report appeared in the reformist Iranian paper Ayande-ye Now (New Future), an enthusiastic supporter of the country's nuclear program. "We had installed 50 centrifuges. One night I was informed that all 50 had exploded," Aghazadeh is quoted as saying. "The 'UPS' (uninterruptible power supply) in charge of controlling the electricity had not acted properly. Later we found out that the UPS we had imported through Turkey had been manipulated."

Paul Kerr, a research analyst at the Washington based Arms Control Association, who blogs at www.armscontrolwonk.com, has speculated on-line that the reference to 'manipulation' suggests the possibility of sabotage of dual-use exports to Iran.

The revelation of Iran's covert nuclear program four years ago revealed ties to Abdul Qadeer Khan, the so-called father of Pakistan's nuclear program, and a serial proliferator. Khan conceded publicly that he sold nuclear know how and technology including key components to Iran and Libya.

During the Iran related investigations, the IAEA was given access by the Pakistani government to Pakistani nuclear centrifuges of the kind sold by Khan to the Iranians. Speaking to CBS News on the condition that he would named be named, a Pakistani official familiar with the U.N. agency's discussions with Pakistan on the Iranian case said the current stock of Iran's centrifuges which are used to enrich uranium by separating radioactive material from raw uranium are capable of "producing just limited amounts which can not equip it with the capability of a sustainable bomb program."

And, a senior Arab intelligence official, speaking to CBS News on the condition that he not be named, said it was unclear if Iran's nuclear establishment had made progress to the "bomb making stage or that it is capable of doing that any time soon."

He said: "Iran has been a heavily sanctioned country for almost 27 years (since the Iranian revolution of 1979). It's not easy for countries in that position to put together a sizeable nuclear program."

But some U.S. officials, arms control experts and analysts continue to be concerned that the enrichment facility at Natanz is in fact, a front, and that Iran operates a second, covert, and perhaps more advanced, enrichment program elsewhere.
Sheila MacVicar, David Martin and Farhan Bokhari