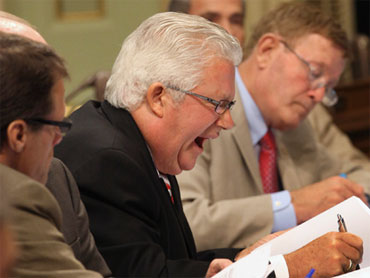 A pro-family values California lawmaker who resigned after being caught on tape boasting about his sexual conquests denied Thursday that he had extramarital affairs, saying "my offense was engaging in inappropriate storytelling."

Mike Duvall stepped down Wednesday after a videotape surfaced in which he was overheard telling a lawmaker about having sex with a lobbyist and another woman, including salacious details about how one mistress wears skimpy underwear and likes to be spanked.

The 54-year-old Republican is married with two adult children.

Duvall said Thursday his "decision to resign is in no way an admission that I had an affair or affairs."

"My offense was engaging in inappropriate storytelling and I regret my language and choice of words. The resulting media coverage was proving to be an unneeded distraction to my colleagues, and I resigned in the hope that my decision would allow them to return to the business of the state," he said in a statement posted on his Web site.

Duvall made the comments about the affairs to Assemblyman Jeff Miller, R-Corona, during a break in a committee meeting inside the Capitol on July 8, apparently unaware the microphone at the desk was on.

"I'm getting into spanking her," Duvall is heard saying on the videotape, which was made as a matter of routine by a legislative office.

Miller asks if she likes it. Duvall responds: "She goes, 'I know you like spanking me.' I said, 'Yeah, that's 'cause you're such a bad girl."'

The lawmaker had received a 100 percent rating from Capitol Resource Institute, a conservative advocacy group, for his votes on legislation considered pro-family during the 2007-08 legislative session

Until the video emerged, Duvall's second term as a member of the California Assembly was progressing much like his first - in relative obscurity, with few notable legislative accomplishments.

He is now a YouTube hit after KCAL-TV aired his racy comments about sexual escapades that were caught by the open microphone in a Capitol hearing room. Several media outlets said the comments referred to Duvall's affairs with two female lobbyists.

California's legislative leaders have been trying to focus on a number high-profile issues - from water policy to prisons to renewable energy - during the waning days of their legislative session. On Wednesday, they instead found themselves answering questions about a lawmaker who bragged about a spanking fetish, the type of underwear worn by a mistress and his apparent ability to carry on two extramarital affairs at once.

"We have such big issues before the Legislature and to have this become a distraction, he felt his responsibility was to step aside," she said.

On the videotape, Duvall also describes the woman's "eye-patch underwear" and the age difference between himself and his mistress, identified in some media reports as a lobbyist for an energy company. He tells Miller, a longtime friend, that the woman's birthday was two days earlier.

Duvall said he joked with the woman that she was getting old after turning 36 and told her, "I am going to have to trade you in."

The lawmaker then brags about an affair he is having with another woman.

"Oh, she is hot! I talked to her yesterday. She goes, 'So are we finished?' I go, 'No, we're not finished.' I go, 'You know about the other one, but she doesn't know about you!"' Duvall can be heard saying in an apparent reference to his affair with the first lobbyist.

Miller, a longtime friend who said he is also close to Duvall's wife, said he doesn't recall the conversation.

"Mike talks a lot during the hearing," Miller told KCRA-TV in Sacramento. "I was getting ready so I wasn't really hearing what he was saying."

Miller's chief of staff, Brandon Powers, did not return phone messages from The Associated Press.

The unseemly remarks also raise questions about the relationship between lawmakers and lobbyists. The Assembly Ethics Committee is investigating Duvall's comments, in part to determine whether the affair might have influenced his votes.

He was vice chairman of the Assembly Utilities Committee.

Sempra issued an e-mail statement saying it was investigating the claims.

"The employee has denied the speculative media reports. Our investigation will be conducted to ensure not only that our policies on employee conduct are strictly adhered to, but also that our employee is treated fairly," the company said.

Duvall was elected in 2006 to represent an Orange County district that includes Fullerton, Anaheim, Placentia, Orange, Brea and Yorba Linda. Before that, he served six years on the Yorba Linda City Council. He also owns an insurance agency.