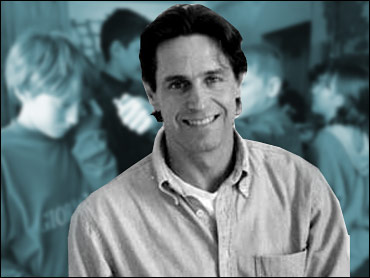 A college-bound teenager who suddenly has the blues and a little boy who loves to talk: those are just two of the topics that parents had on their minds when they decided to "Ask Mike."

The Saturday Early Show's family and adolescence counselor, Mike Riera provided advice to the parents who sent email to "Ask Mike" about those problems.

Last year, pre-graduation, my 19-year-old became very short with me prior to going off to West Point. Now it's one of my 18-year-old twins who is angry at the world. Sorry to say, he watched me go through a major depression after my older son left. Is he hurting over leaving home, though he says he is ready to go? Or could this be fueled by the fact that his dad is back in the picture after seven years with no contact?

Mike's Response:
There are predictable times in all our lives when old unresolved issues and new anxiety can overwhelm us: Getting married; the birth of a first child; the first or last child leaves home. And for kids: high school graduation with the subsequent move away from home and off to college.

In your family, on top of a child going off to college, which is your issue, and on top of your son leaving home, which is his issue, you have the old issue of dad having been out of the picture for more than seven years. In other words, I would be shocked if you and your family weren't having difficulty with these transitions!

What is the son struggling with?

He is most likely worried about his own transition to college --away from his parents and away from his twin. That's a lot of sadness and anxiety. Or, as one senior said to me once: 'I'm ready to go to college, I'm just not ready to leave high school.'

On top of this he's worried about his mom suffering from depression again.
In a weird way, and clinically we see this in families that are extremely empathetic with one another, he is attempting to take care of you: That is, if he is a real pain, he keeps your constant attention and concern, never allowing room for depression to fester and grow.

What is the best way for this family to handle their situation before the son leaves home?

The solution is to get some therapy for the family. Everyone talk about what is going on. That's the upside to these transitions: With some good therapy, you can cover a lot of ground in a short amount of time.

I have an eight-year-old who talks NON-STOP. He is in trouble at school on a daily basis because he disrupts the classroom. He will interrupt you during a conversation. We have repeatedly told him how inconsiderate this is. HELP! He's really a sweet child, and it's not out of meanness. It's just that he LOVES to share.

First, I would talk this over with your pediatrician. He or she has known your son for many years, so see what their take on his non-stop talking is. Pediatricians can be of great help, as long as we remember to ask them what it is exactly that we're concerned about.

How can a pediatrician help?

Most pediatricians have seen and worked with kids like this--or have exact referrals. But my hunch is that this is an exuberant and verbal child who just loves to talk and knows he can get lots of attention by talking. Even if the attention he gets is you getting upset with him, it's attention. So the key is to take away the attention he gets from non-stop talking.

Take the team approach. Talk with the school and come up with a consistent approach in how you deal with his outbursts. Even ask your son to come up with suggestions so that he is party to the planning. The idea is that if he gets the same response from all the adults around him, it'll help enormously to break the habit.

You suggest an interesting way of teaching him to modify his behavior. Walk us through it.

Start small: When he talks, count from one to five on your fingers in silence, then let him talk. Once he learns to delay, even if it's just five seconds, it's relatively easy to increase the length of time.

Or, you can give him a previously agreed upon sign that he needs to wait: shuffle your feet, tug on your ear. Then wait a pre-determined amount of time before he continues talking. Or, have him write down what he wants to talk about first. In short, anything to slow him down and teach him to control his impulses to blurt out. If he talks despite the plan you come up with, simply don't listen and walk away -- but tell him beforehand that this is what you are going to do!

As a last resort, is it ever okay to just tell a child point-blank, "You talk too much, and it's annoying?"

I would avoid having too many talks that focus on how you feel. It's not about making him feel guilty, it's about getting him to make himself feel better by exerting more self-control.