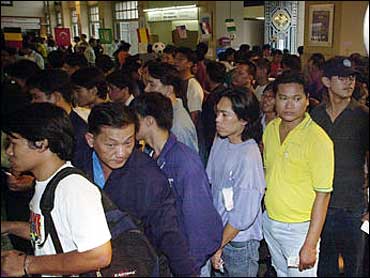 Prapai Lertphiphat is an average Thai woman: short and slender, a picture of perfect health.

But in Asia, appearances can be deceptive. The 44-year-old hospital clerk is suffering from the classic disease of overweight people: hypertension, or high blood pressure.

Prapai is not alone in her plight.

After a series of independent surveys in 10 Asian countries, researchers have come up with an alarming conclusion — millions of people like Prapai in the region have symptoms of obesity, despite their small frames and apparent lack of excess fat.

It is not that Asians have suddenly become unhealthy. It's just that health experts had all along been applying a global standard, known as body mass index, to measure obesity that was unsuited to Asians.

To help doctors prevent obesity-related ailments, the World Health Organization established in 1997 a body mass index standard, calculated by dividing a person's weight in kilograms by height in meters squared. A BMI of 25 is overweight, and 30 is obese.

But the 10-country research showed that Asians had more fat content compared to Caucasians, which meant that a BMI of 25 was way above overweight for Asians.

In response, a group of WHO experts in July recommended an Asian optimal BMI of 23. Anything over it should be considered overweight and a health risk, they said.

In other words, an Asian and Caucasian may be the same weight and height, but the Asian is at greater risk for fat-related illnesses such as heart disease and diabetes. The countries surveyed were Hong Kong, India, Thailand, Malaysia, Fiji, Indonesia, Singapore, mainland China, South Korea and the Philippines.

Researchers in Hong Kong found that as people surpassed a BMI of 23, there was a very sharp rise in the risk of heart disease.

Studies in India found that city dwellers have an average BMI of 24.5, and have diabetes rates four times higher than their rural counterparts, hypertension 2 1/2 times higher, and heart disease two times higher.

Prapai has a BMI of 23.5 because she weighs 55 kilograms (121 pounds) and is 1.53 meters (5 feet) tall. The Thai woman's medical problems have forced her into a salt-free diet and a daily regime of antihypertension pills.

"Mornings when I forget to take my medicine, I get headaches and lose my balance while standing," Prapai said.

In Singapore, Tan Choon Ping, a recent college graduate, was told by his doctor to lose 2 kilograms (4.4 pounds) from his 82 kilograms (181 pounds).

"I was utterly mortified when my doctor told me I was overweight," said Tan, 22. "I nearly throttled her."

Scientists are yet to figure out why Asians have more fat than Caucasians. But they cite a range of theories including evolution, maternal nutrition or simply lack of exercise.

Jeffrey Friedman, a researcher at Rockefeller University in New York, said populations that store more body fat may have been naturally selected through generations of famine.

In ancient times, people in areas prone to famine — such as China or India — developed a biological mechanism to store more fat to survive. When subsequent generations prospered, they accumulated excess fat, said Friedman.

"Having more fat is good in certain environments because ... it helps one survive the famine," Friedman said.

If a fetus doesn't receive sufficient nutrition, it adapts its metabolism to consume nutrition conservatively, she said from New Delhi. When the baby is born, its metabolism may not be able to keep up with the greater availability of food, leading to excess fat.

Also, people in Asia tend to exercise less than those in the West, which sets them up for heart diseases later in life, although the treadmill trend is catching on among wealthier Asians.

In China, more than 60 percent of people do no physical exercise, according to a survey by a Chinese government sports research organization.

It said less than 8 percent of China's 1.2 billion people exercise with "average intensity" compared to 41 percent Britons and 20 percent Americans.

In countries like India and Malaysia, people still wear flab around their waists as a badge of prosperity.

"We do know there has been a shift towards an overeating population, eating more than the body requires," he said.

Nothing wrong with that, some counter.

"So what's wrong with my paunch," asked Indian businessman Lalit Gupta, patting his belly at his grocery shop in New Delhi. "Business is booming ... and you might as well eat well and live well."