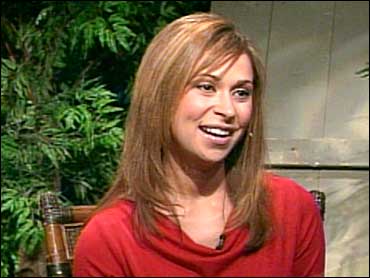 On Thursday night's second edition of "Survivor: Palau," South Carolina native Ashlee Ashby learned a valuable "Survivor" lesson: Not going along with the crowd will get you booted off in a hurry.

"I'm here because I was done playing the game," Ashby says to The Early Show co-anchor Rene Syler.

There was no room for the weak at Ulong, and the 22-year-old student says her Mormon upbringing made it hard to stratagize like the other contestants.

"I am very fortunate to to have grown up in a loving and positive family, and I was raised with very strict morals," she says, "So it was very hard for me to surround myself with the lying and the deceiving and backbiting."

In essence, she says, the negativity of the group ended up draining her.

"The game entailed more strength, mentally than I could give," she says, "And it was becoming a damper on my spirit and I was done."

She was even so tired she went to sleep instead of join her teammates victory feast: a clam soup that satisfied the hunger that had been gnawing for the last four days.

"The only thing I was worried about was going to sleep," Ashlee says, "And the only reason I stayed by the fire was because it was warm."

And her loose alliance turned on her and voted her out at tribal council. Ashlee says she was not surprised.

She explains, "James said the person he was voted for last night was ready to go home. And I knew he was talking about me."

And though in one sense she says she wished to still be part of the game, Ashlee says, "In a sense, he did do me a favor because I was done playing the game."

As for the love affair that appeared to be forming between Kimberly Mullen and Jeff Wilson, Ashlee says, "We were all speculating, wondering if they were just getting together for another Rob and Amber. We all saw that. I don't know if their intentions of being together were to form a tight alliance or if they are really attracted to each other and had more on their minds other than winning the million dollars."

What's next for Ashlee? The doors are open, she says, and she wants to see more of herself in the public eye, looking all dolled up instead of plain and tame, as she was seen as a "Survivor" castaway.

He Took A Bullet For Reagan
View CBS News In
CBS News App Open
Chrome Safari Continue
Be the first to know
Get browser notifications for breaking news, live events, and exclusive reporting.