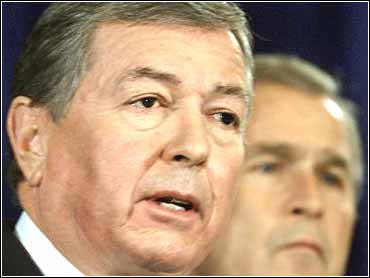 In response to inquiries from CBS News over why Ashcroft was traveling exclusively by leased jet aircraft instead of commercial airlines, the Justice Department cited what it called a "threat assessment" by the FBI, and said Ashcroft has been advised to travel only by private jet for the remainder of his term.

"There was a threat assessment and there are guidelines. He is acting under the guidelines," an FBI spokesman said. Neither the FBI nor the Justice Department, however, would identify what the threat was, when it was detected or who made it.

A senior official at the CIA said he was unaware of specific threats against any Cabinet member, and Ashcroft himself, in a speech in California, seemed unsure of the nature of the threat.

"I don't do threat assessments myself and I rely on those whose responsibility it is in the law enforcement community, particularly the FBI. And I try to stay within the guidelines that they've suggested I should stay within for those purposes," Ashcroft said.

Asked if he knew anything about the threat or who might have made it, the attorney general replied, "Frankly, I don't. That's the answer."

Earlier this week, the Justice Department leased a NASA-owned G-3 Gulfstream for a 6-day trip to Western states. Such aircraft cost the government more than $1,600 an hour to fly. When asked whether Ashcroft was paying for any portion of the trips devoted to personal business, a Justice Department spokeswoman declined to respond.

All other Bush Cabinet appointees, with the exception of Interior and Energy with remote sites to oversee, fly commercial airliners. Janet Reno, Ashcroft's predecessor as attorney general, also routinely flew commercial. The secretaries of State and Defense traditionally travel with extra security on military planes.

The Justice Department insists that it wasn't Ashcroft who wanted to fly leased aircraft. That idea, they said, came strictly from Ashcroft's FBI security detail. The FBI had no further comment.