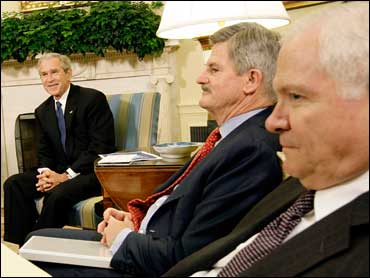 Ashcroft said that following the Sept. 11 attacks, the Justice Department redefined its mission to stop those "who kill Americans in the name of murderous ideologies."

While the budget emphasizes spending on counterterrorism and technology, it also reduces or eliminates some programs popular in Congress.

"The challenges we face are complex and unprecedented," Ashcroft told the Senate Appropriations subcommittee in charge of the department's budget. "After Sept. 11 the world awakened to a new threat from an old evil."

Ashcroft also defended his decision to recuse himself from the Enron investigation and leave the probe in the hands of Deputy Attorney General Larry Thompson. Sen. Ernest Hollings, D-S.C., who wants a special counsel appointed, said Thompson's former law firm has represented Enron.

Ashcroft responded that he had a responsibility to exempt himself because of the appearance of conflict. But he declined to comment on whether Thompson had a conflict, and said he would ask the deputy to appear before the panel to explain his role.

Many of the senators' questions centered on counterterrorism.

Sen. Barbara Mikulski, D-Md., said there was confusion over whether local officials or the FBI would be in charge at the scene of a terrorist attack. In the anthrax attacks, responders from different agencies were bumping into each other, she complained.

"We want to work cooperatively with everyone," Ashcroft said, but added: "We believe the FBI manages the scene at a time of crisis."

Mikulski countered that the mayors and fire chiefs believe they're in charge, and suggested that the issue be resolved soon.

The administration's proposals for Justice include $1.9 billion in new spending authority for anti-terrorism measures, including a new immigration system to track foreign visitors and better aircraft with new surveillance features. Most of that money would go to FBI and Immigration and Naturalization Service.

But in a move already stirring criticism in Congress, the White House also wants to reduce federal aid to state and local police, such as grants to help hire more police officers in cities and towns, because it said there was no evidence the money was helping to reduce the nation's crime rates.

Lawmakers supportive of these programs, which can translate into new jobs and millions of dollars for a congressional district, complain that funding is being cut even as the federal government seeks an unprecedented level of help from local and state police to prevent terrorist attacks.

Several senators complained that about plans to eliminate about $385 million from a program that hired new police offices under the Clinton-era Community Oriented Policing Services (COPS) program.

When Ashcroft said "I don't know of a federal program that's been more successful," Sen. Herb Kohl, D-Wis., said, "I don't know what to make of your answer." He asked Ashcroft whether he was saying, "It's a great program but we're moving in another direction."

Ashcroft said he agreed with that description, but later added that state and local law enforcement would receive an overall increase of some $2 billion from other Justice Department programs.

The Bush administration has offered instead to create an $800 million grant program for state and local police for spending on projects that would not be decided by Congress.

The Justice budget also includes $186 million for the FBI to improve its computers and radios, which the White House described as "seriously deficient." And it provides $155 million for the FBI and INS to share intelligence information about foreign visitors.

Overall, the budget for Justice remains largely unchanged over last year, largely because of an extraordinary $2.1 billion in emergency funding from Congress after the Sept. 11 attacks.