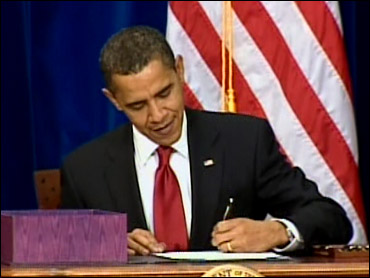 On the fifth anniversary of President Obama signing the stimulus into law, the administration is declaring success with a new report from the Council of Economic Advisors (CEA) highlighting its benefits.

“Five years after the Recovery Act, the U.S. economy is undoubtedly in a stronger position than when President Obama took office. The economy has now grown for 11 straight quarters, and businesses have added 8.5 million jobs since early 2010,” CEA chairman Jason Furman wrote in a White House blog post this afternoon. “While far more work remains to ensure that the economy provides opportunity for every American, there can be no question that President Obama’s actions to date have laid the groundwork for stronger, more sustainable economic growth in the years ahead.

Among the successes the CEA cites is the saving or creation of about 1.6 million jobs a year for four years through the end of 2012, which is consistent with estimates made by the Congressional Budget Office. Along with additional measures passed after the American Recovery and Reinvestment Act (ARRA), they say the total job creation was about 9 million one year full-time jobs through the end of 2012.

The bill was a combination of tax cuts, which comprised about $689 billion, and investments in areas like infrastructure and teacher pay. The report says the infrastructure investment led to the improvement of 40,000 miles of road and more than 2,700 bridges, and brought 693 drinking water systems that served nearly 50 million people into compliance with the Clean Water Act, according to the report. The CEA says that even those figures understate the effect of the recovery because they do not take into account other policies like the bailout of the auto industry and support for the housing sector that helped boost the economy.

Overall, though, they say the report, “affirms that the Recovery Act had a substantial positive impact on the economy, helped to avert a second Great Depression, and made targeted investments that will pay dividends long after the Act has fully phased out.”

Despite the White House’s proclamation of success, Republicans still largely view the stimulus as a failure.

"Five years later, underemployment is still too high, the number of people that have dropped out of the workforce is astounding, unemployment remains stubbornly high and our economy isn't growing fast enough – proof that massive government spending, particularly debt spending, is not the solution to our economic growth problems," Sen. Marco Rubio, R-Fla., said in a video statement released Monday.