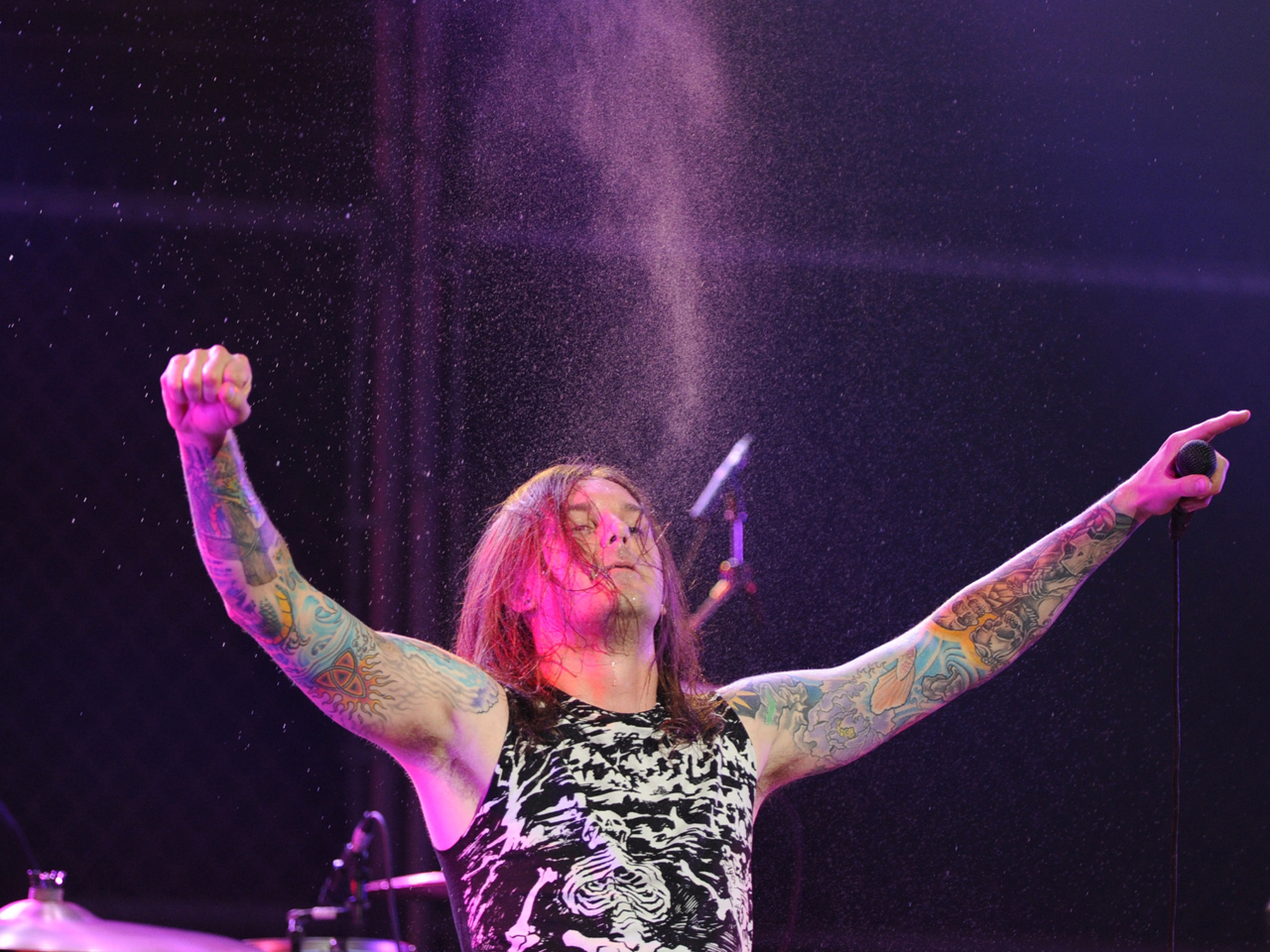 SAN DIEGO Divorce documents show that the lead singer of metal band As I Lay Dying had an amicable split with the estranged wife he's now accused of trying to hire a hit man to kill, but she was concerned about how recent changes in his behavior would affect his parenting.

Meggan Lambesis, the wife of Tim Lambesis, said in the court papers obtained by The Associated Press on Wednesday that she worried about his ability to care for their three adopted children, but she gave no indication she felt in danger.

Law enforcement officials said they arrested Tim Lambesis after receiving a tip last week that the 32-year-old singer -- who is covered in tattoos and known for his growling voice -- was plotting to kill his wife, who filed for divorce in September.

Authorities said Lambesis tried to hire an undercover detective he believed was a hit man, and he was arrested Tuesday while shopping at a store in Oceanside.

The couple adopted the children -- ages 4, 8 and 10 -- from Ethiopia, and Tim Lambesis continued to see them for about 10 hours a week when he was not on tour, even though the couple was no longer living together, according to court documents.

Meggan Lambesis said her estranged husband had become "obsessed with bodybuilding" and was distracted while with the children, often texting or talking on the phone. She noted he had fallen asleep while watching them at the beach or near the pool and said they need a "stable parent" to help them adjust to their new life and country.

She said he tours six months out of the year and had traveled across the country twice in one year to visit a girlfriend. She said he also had spent thousands of dollars on tattoos. Both had agreed to private mediation to discuss the children's custody.

Tim Lambesis' comments about his Grammy-nominated band's latest album, "Awakened," indicate he may have been struggling.

The band's website says the album -- released the same month his wife filed for divorce -- is a "far darker, more pessimistic beast" compared to previous albums.

"On this record, I wasn't purposefully trying to be negative, but I think sometimes we have to be honest with some of the darker and more difficult times of our lives to get back to that positivity," Lambesis is quoted as saying. "While the lyrics do perhaps seem like a dark window into my soul, they're written that way specifically because I want to move on and transcend those difficult moments in life."

Authorities said a task force from several law enforcement agencies launched an investigation that led to the arrest late Tuesday. The department would give no further details.

A man who answered the phone at a number listed in the singer's name in Del Mar said the family was not commenting at this time.

Lambesis was scheduled to be arraigned Thursday in Vista. His attorney could not be reached for comment.

As I Lay Dying formed in San Diego in 2000 and has released six albums, including 2007's "An Ocean Between Us," which reached No. 8 on Billboard's charts. A single from the album, "Nothing Left," was nominated for a Grammy for top metal performance.

The band, which plays in an aggressive style that features metal guitar riffs at the furious pace of hardcore punk, was scheduled to tour the country this summer.

Its record label, Metal Blade, said in a message posted to the band's fans that "there are many unanswered questions, and the situation will become clearer in the coming days and weeks."

"We'll keep you informed as best we can," the message said. "Our thoughts right now are with Tim, his family, and with everyone else affected by this terrible situation -- and with our fans, whom we love and draw strength from."

Lambesis recently did an interview with heavy metal website, Blabbermouth, about his new side project, Pyrithion. Check it out below: