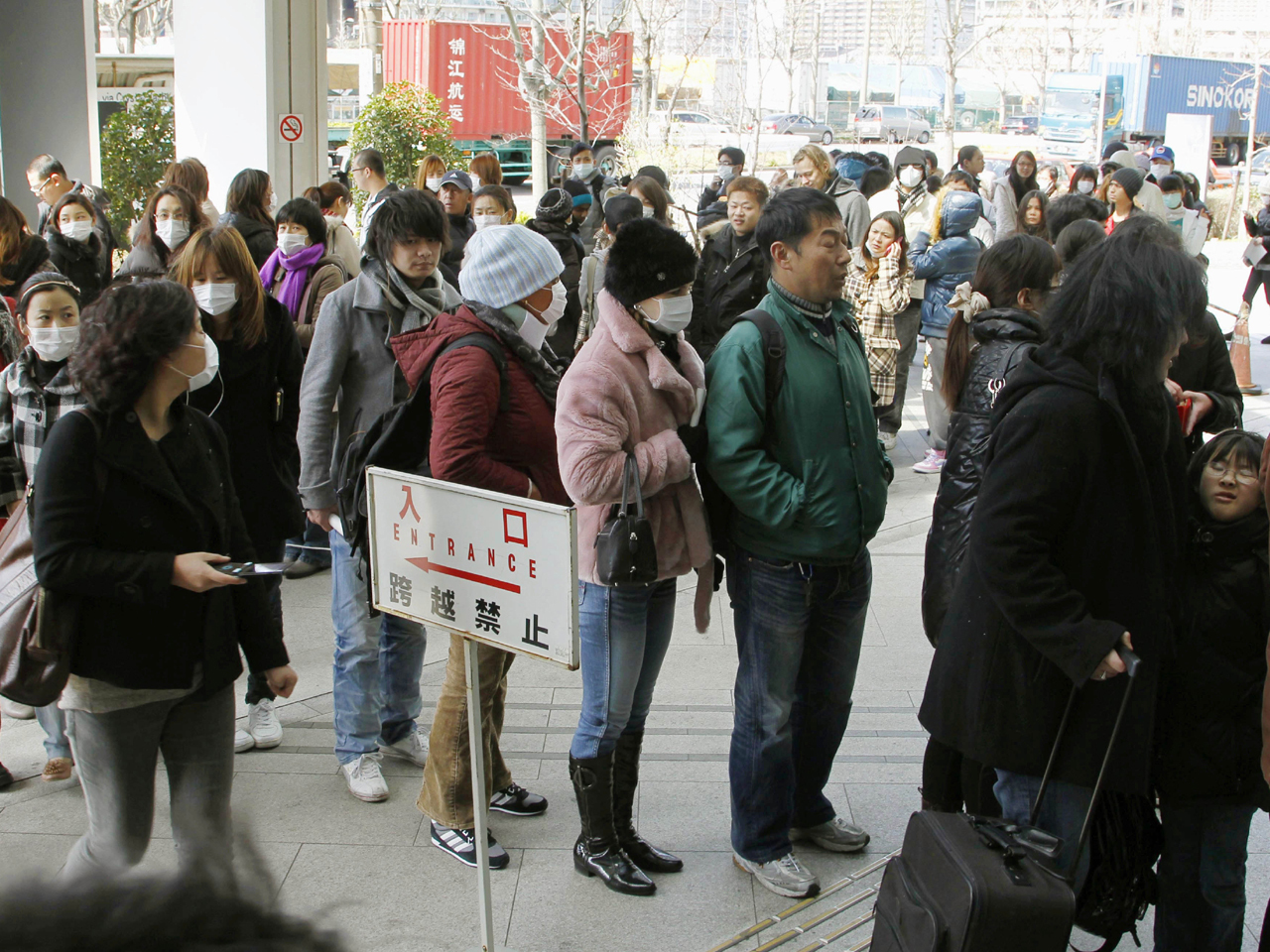 Megan Towey is a CBS News producer based in Miami, currently on assignment in Japan.

There's something unique about traveling as a journalist. Whereas most people visit places for beauty, adventure or solitude, a journalist's travels, more often than not, ultimately arrive at the doorstep of disaster. Natural disasters, terrorist threats, war zones - not exactly your average weekend getaway. You see life at its most difficult and people at their most vulnerable. The goal is to remain an observer, allowing you to keep your distance and look at situations objectively. This also means that, no matter how awful or heartbreaking a situation is, journalists always have the knowledge that they will eventually get to go home.

One week after the world first saw images emerging from Japan: first an earthquake, then a deadly tsunami and now, an escalating nuclear threat, I thought about home as I watched the massive lines of people anxious to leave the country. In many cases, these were people who weren't Japanese by birth, but had chosen to make the country their home. Then, in a matter of seven days, their lives had completely changed. Many people we talked to felt compelled to repatriate out of a sense of caution, worried their families might not be safe if they remained in Japan. The majority of them had extended family elsewhere - therefore, they had somewhere to run to.

Not only did they have somewhere to run, they also had the governments of the homelands they'd once left behind tying their running shoes. Within days of the earthquake setting into motion a tragic chain of events, nations around the world began issuing travel warnings and suggesting voluntary departures. And now, as the world waits to see what happens at the Fukushima Dai-ichi nuclear plant, countries a world away are devising plans to evacuate their citizens - should the need arise. The French and Russians have already begun - chartering planes to assist their people voluntarily wanting to leave Japan. The Chinese, Algerians and Colombians pledge to follow suit and the Swiss offer assistance if commercial flights become unavailable.

Earlier this week, when the NRC recommended increasing the size of the danger zone surrounding the Fukushima nuclear plant to 50 miles, the U.S. State Department announced that it would arrange charter flights to evacuate family members of U.S. diplomats who wanted to leave Tokyo or other parts of northern Japan. Like the Swiss, the U.S. might make those flights available to private citizens who can't get out on commercial planes. But taxpayers shouldn't worry that Uncle Sam will be footing the bill. U.S. law requires all passengers in a voluntary evacuation have to pay their own way. And that's one thing Undersecretary Patrick Kennedy stressed while making the statement, that for now those evacuations ARE voluntary. The U.S. Embassy is still open for business. If, however, at some point a mandatory evacuation is ordered, the Civil Reserve Air Fleet stands ready to ferry as many as 50,000 Americans out of Japan a day. But today is not that day.

Still, it's somewhat comforting to have a plan in place when things start going terribly wrong. CBS has a plan in place for those of us here in the Tokyo bureau, making sure we have tickets booked daily so we could escape a sticky situation in less than 24 hours. You hope you don't need it and chances are you won't, but it's still nice to know the option is there.

Here in Tokyo, they must have a pretty good plan, I thought. Everyone seems so calm about the whole thing, going to work and about their day. Meanwhile, as far away as Arizona, vitamin stores sold out of iodine pills, purchased by people fearing that radiation from the Japanese plant could traverse the Pacific Ocean. So what are they doing right in Tokyo -- so close to the epicenter of the potential disaster -- that people aren't going out of their mind with worry?

It's long been said that Japan has the most advanced early warning system in the world. Officials are quick to sound the alarm and initiate evacuation orders. Earthquake kits are sold in department stores, building codes are very tough and families are urged to have emergency meeting spots and times -- a well oiled machine. So I was anxious to see what the well-prepared Japanese had laid out for potential nuclear fallout. Especially since, in my mind anyway, there are two countries that would naturally be the most sensitive about nuclear issues - Ukraine and Japan.

So, I asked our translator Mai to go out with a photographer and ask people on camera what the plan was if the worst happened at the Fukushima plant. While she was gone I started searching for fallout shelters in Japan. Nothing, not one. Though I did see some conspiracy theorist rumors that the Japanese subways were designed for that purpose.

Next, I asked a Japanese speaker in our office to call the local government and see what the evacuation or emergency plan was for Tokyo in event of a nuclear emergency. Turns out, it's two pages long. It lays out that the Tokai Mura nuclear plant accident in 1999 was the first time citizens were forced to evacuate to escape radiation exposure. As a result of that tragedy, the government devised emergency protection zones around nuclear plants. But, because there are no plants here in Tokyo, the law does not dictate that an emergency plan be on file. I admit, I was surprised. Maybe I was just missing something and it had been drilled into the Japanese consciousness what to do in situations like these.

When Mai came back, I asked her what people had said out on the street. She said the people she spoke with were frustrated. They said the government wasn't giving them enough information, and what it was giving them - daily radiation level reports - were incomprehensible to anyone who didn't have an advanced degree in nuclear physics.

The best thing they knew to do: Stay in the house. Don't go anywhere. No wonder the grocery stores were sold out of dried noodles, bottled water and toilet paper. People were preparing to go into hibernation. Scientists say staying indoors is a solid piece of advice - but was that the extent of Tokyo's preparation?

In an American city, people would be up in arms if there was a potentially catastrophic accident waiting to happen in their backyards and the government had no plan to deal with it.

Maybe as Americans, we're too alarmist while the Japanese prefer to look at things more pragmatically. I asked a colleague who has lived in Japan for some time - didn't she think it was strange there was no emergency plan in place to deal with the worst case scenario? Or if she thought there was a plan, but nobody really wanted to talk about it so as not to create societal chaos. In response she recounted an interview she had once done with a non-native professor at a Japanese University.

He told her that to people in Japan nuclear energy is like Godzilla. It's a beast. But they believe they've tamed it. So there's no need to panic.

For the sake of everyone here, I hope they are right -- that, while the beast has temporarily escaped his cage, the Japanese will still be able to get him back inside.

Either way, though, I will - eventually - still get to go home.