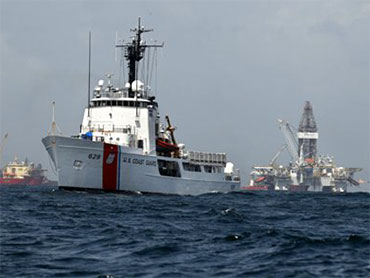 Work to permanently choke off the oil well that had been spewing into the Gulf of Mexico was at a standstill Friday after ships around the site were ordered to evacuate ahead of the approaching Tropical Storm Bonnie, which had weakened to a tropical depression by Friday evening.

There had been worries that the cap that has mostly contained the oil would have to be reopened and left gushing if a major storm came through. But engineers were confident enough in the strength of the cap that they decided to leave it sealed while most of the ships on the surface were told to leave the area.

However, BP executive Doug Suttles told CBS News correspondent Kelly Cobiella that there will be no live monitoring of the capped well until the storm blows over.

Suttles said the company is hoping to have some video and photos stored that can be examined after the storm passes.

The storm, which blossomed over the Bahamas and was to enter the Gulf of Mexico by the weekend, could delay by another 12 days the push to plug the broken well for good using mud and cement, retired Coast Guard Adm. Thad Allen and BP officials conceded. Even if it's not a direct hit, the rough weather will push back efforts to kill the well by at least a week.

"While this is not a hurricane, it's a storm that will have probably some significant impacts, we're taking appropriate cautions," Allen said in Mobile, Ala.

Cobiella reports that BP's ships won't return to the Deepwater Horizon site until Monday at the earliest. Work remains to be done on the relief well before BP can try pumping mud from the Gulf's surface into the cap, killing the well, which has been referred to as a "static kill." That procedure could start as early as Wednesday.

The delay in work would be worse if BP had to fully open the cap while the ships closely monitoring the well head left. More oil would have been allowed to spew into the Gulf until they returned.

A week of steady measurements through cameras and other devices convinced Allen they don't need to open vents to relieve pressure on the cap, which engineers had worried might contribute to leaks underground and an even bigger blowout. The cap was attached a week ago, and only minor leaks have been detected.

Allen said earlier in the day that evacuating the vessels could leave the well head unmonitored for up to a few days. He said he ordered BP to make sure the ships carrying the robotic submarines watching the well are the last to leave and the first to return.

Allen issued the order Thursday night to begin moving dozens of vessels from the spill site, including the rig that's drilling the relief tunnel engineers will use to permanently throttle the free-flowing crude near the bottom of the well. Some vessels could stay on site, he said.

"While these actions may delay the effort to kill the well for several days, the safety of the individuals at the well site is our highest concern," he said in a statement.

It was unclear Thursday night whether some of the vessels would go back to port or head farther south in the Gulf out of the path of the storm and await orders once the storm passes. The Coast Guard cutter Decisive, the hurricane guard for the vessels at the spill site, was awaiting instructions. In an evacuation, the Decisive is the last vessel to leave the area.

Bonnie had maximum sustained winds near 40 mph early Friday as it swirled about 155 miles southeast of Miami.

Seas already were choppy in the Gulf, with waves up to five feet rocking boats as crews prepared to leave, and more of the smaller boats involved in the coastal cleanup were called into port, Coast Guard Rear Adm. Paul Zukunft said.

At the spill site, the water no longer looks thick with gooey tar. But the oil is still there beneath the surface, staining the hull of cutters motoring around in it.

One large vessel - the Helix Q4000 - is burning off oil collected from the water, and bright orange flames flared at the side of the ship.

Scientists say even a severe storm shouldn't affect the well cap, nearly a mile beneath the ocean surface 40 miles from the Louisiana coast. "Assuming all lines are disconnected from the surface, there should be no effect on the well head by a passing surface storm," said Paul Bommer, professor of petroleum engineering at University of Texas at Austin.

"That cap was specially made, it's on tight, we've been looking at the progress and it's all good," he said after his ship returned to Port Fourchon, La.

Before the cap was attached and closed a week ago, the broken well spewed 94 million to 184 million gallons into the Gulf after the BP-leased Deepwater Horizon rig exploded April 20, killing 11 workers.

Work on plugging the well came to a standstill Wednesday, just days before authorities had hoped to complete the relief shaft. Allen said Thursday he has told BP to go ahead preparing for a second measure called a static kill that would pump mud and cement into the well from the top, a move he said would increase the relief well's chances for success. BP will have to get final approval from Allen before starting the procedure.

Vice President Joe Biden visited cleanup workers in southern Alabama, and said he was cheered the cap could remain on.

"After the storm's passage we will be right back out there," Biden said.