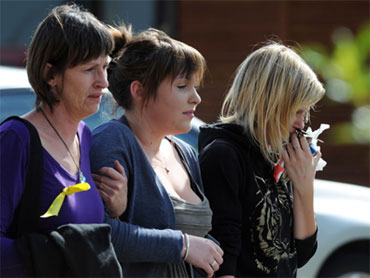 A judge heard competing appeals Tuesday in the disappearance of Natalee Holloway, with a defense lawyer seeking the release of a Dutch teen in the case and prosecutors asking for the re-arrest of two brothers from Suriname.

Brothers Satish and Deepak Kalpoe, and 17-year-old Joran van der Sloot were among the last people to see Holloway before the Alabama teenager vanished on the final night of a high school graduation trip to the Dutch Caribbean island.

The hearings were closed and the judge was expected to confer with two colleagues before issuing a ruling Thursday.

Separately, a U.S. organization that has searched for the missing teenager for more than three weeks, said it planned to halt its efforts and return home on Sunday.

"We want to feel in our hearts we did everything," a tearful Tim Miller, director Texas EquuSearch, said at a news conference.

The first hearing Tuesday was an appeal of a judge's ruling earlier this month that there was insufficient evidence to hold the brothers in Holloway's disappearance. Satish Kalpoe, 18, and Deepak Kalpoe, 21, had been in custody since June 9, when they were arrested along with van der Sloot. They were released on July 4.

The Kalpoe brothers left court with their lawyers after brief hearings. Van der Sloot left the courthouse — handcuffed and hiding his face from the news media — in the custody of authorities.

David Kock, the lawyer for Satish Kalpoe, said he was confident the younger brother would remain free.

"There's nothing new against my client," Kock said outside the courthouse. "I'm speculating but perhaps the prosecution wants to appeal for PR reasons."

Kock said prosecutors informed him Monday that they had new evidence in the case that included online chatroom conversations between Deepak Kalpoe and van der Sloot.

But Ruud Offringa, the lawyer for the older brother, told reporters the chatroom conversations were not new evidence and had previously presented to a judge.

The judge was also hearing a fourth appeal from prosecutors seeking to overturn an order allowing van der Sloot's father, Paul, to visit his son while he's in custody.

Attorney General Caren Janssen has said that Paul van der Sloot, a judge in training on the island, had given his son and two friends legal advice, allegedly telling them, "When there is no body you don't have a case."

The father was arrested June 23 and released four days later after a judge ruled there was not enough evidence to hold him.

Holloway, 18, vanished in the early hours of May 30, just before she was to catch a flight home after a five-day vacation celebrating her high school graduation with 124 classmates.

Extensive searches of the island and surrounding waters by authorities and volunteers have turned up no trace of the young woman. Members of a volunteer search team from Florida State University's underwater crime scene investigation department left the island Tuesday.