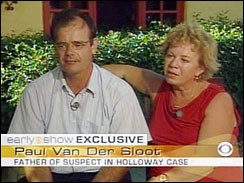 Paul and Anita van der Sloot's dream is to have their son home.

In an exclusive interview with CBS News correspondent Kelly Cobiella, Anita says, "We want him to go on with his life."

Joran van der Sloot, 18, has been held since early June in the May 30 disappearance from Aruba of Alabama teen Natalee Holloway.

Joran hasn't been charged, but authorities on the Dutch Caribbean island have named him a suspect in the case.

His parents say the only thing established for sure is that Joran was with Natalee the night she vanished, and they stand by his insistence that he didn't hurt her.

Prosecutors have to notify Joran's attorney if they plan to ask a judge to hold him for 30 more days. As of Monday night, it hadn't happened. A hearing is set for Wednesday, and Joran could be set free.

Natalee's mother, Beth Holloway Twitty, says she's convinced Joran is guilty and that Paul, a one-time judge in training, is helping Joran get away with it.

Paul denies it, saying, "We are not hiding anything. We are telling the whole truth, nothing but the truth. And we've always told Joran to tell the truth."

From the beginning, Cobiella says, Joran has been the main suspect, and the primary focus of prosecutors and the press. Anita accuses both of following bad leads and spreading rumors, instead of looking for the truth.

But she's most upset with Holloway's family for attacking her son and husband on television.

"I think what the family is doing is terrible," Anita says. "I don't think it's their right to do these things like this. I know they must be upset."

The van der Sloots have chosen to defend themselves only sporadically until now, because they blame the U.S. media for making their son look guilty.

"News should be based on facts," Anita says. "If not, it's a show … to damage people, to slander people. That is no news, no news at all."

But the van der Sloots agree with Holloway's family on this: The investigation was botched from the beginning and, they add, that they also desperately want the mystery solved.

"If Natalee is never found," Paul says, "it will always, always hit our lives, not only the lives of the Holloways, but also our lives."

The van der Sloots have an angel in their home they keep lit for Natalee, but right now their focus is on their own child.