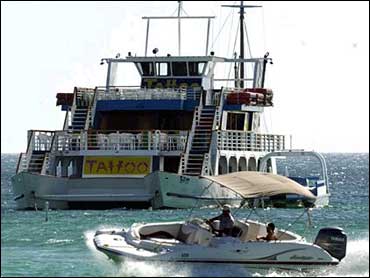 Aruban authorities broadened their investigation into the case of a missing U.S. teen Saturday after arresting a party boat disc jockey.

Meanwhile. a judge considered prosecutors' request to extend the detention of three other young men in custody--one the son of a prominent justice official on the island.

Steve Gregory Croes, 26, was arrested early Friday, a day after he was contacted by police and went voluntarily to the station to give a statement, his employer, Marcus Wiggins said.

Croes, a disc jockey on the party boat "Tattoo," said he knew one of two brothers from Suriname being held in the case because he went to the same Internet cafe as the brother, Wiggins said.

The Aruban attorney general's office released a statement announcing the arrest, but identified Croes only by his initials, "S.G.C."

The person "is suspected of being involved in the disappearance of the tourist," the statement said, referring to 18-year-old Natalee Holloway, who vanished in the early morning hours of May 30. "As a result of the ongoing investigation, this is all the information that can be given at this time."

Meanwhile, Holloway's mother told CBS News that she expected more arrests very soon. She also expressed frustration with the lack of information authorities were sharing with her. Still, was holding onto hope that her daughter was still alive.

The "Tattoo" is a large tourist boat offering nightly dining, dancing and swimming, according to a promotional brochure. Wiggins, who owns the boat, said he had never seen the Surinamese brothers, Deepak Kalpoe, 21, and Satish Kalpoe, 18; or fellow detainee Joran van der Sloot, 17, son of justice official Paul van der Sloot, on board the boat. The brochure notes that patrons must be 18 or older.

In Alabama, a woman who helped organize the graduation trip, Jody Bearman, said the students did not go on the "Tattoo" as a group, although some of the teens could have taken a ride on the boat on their own without the knowledge of the seven adult chaperones.

"The chaperones were not supposed to keep up with their every move," she said.

Wiggins said Croes had worked for the boat "for a period of time," but he could not say how long exactly.

"I've never had problems with him," Wiggins said. "He keeps to himself and shows up to work every day and does his job."

Holloway Twitty, 44, a preschool speech pathologist, flew to Aruba within hours of Natalee's disappearance on May 30 and has followed the case doggedly ever since.

Looking tired and angry during an interview at the Radisson Hotel in Aruba, she said she was increasingly unhappy with investigators' seeming lack of progress.

"This case is not that hard to figure out," she said. "Those boys have the answers," she added, referring to Joran van der Sloot and the Kalpoe brothers.

Holloway Twitty has said previously that if investigators don't make progress soon, she might start to think that they are trying to protect the detainees.

She refused to speculate about what happened to Natalee, but added, "I'll believe my daughter is alive until I find out otherwise."

Aruban authorities have said they are pursuing all leads and protecting no one.

Friday's arrest came nearly three weeks after Holloway's disappearance on the same day she was to return from a five-day trip with 124 other students celebrating their high school graduation in Mountain Brook, Alabama.