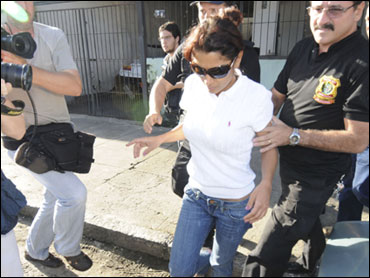 RIO DE JANEIRO (AP) The Brazilian wife of Arturo Gatti asked to be released from jail, where she is held on accusations she strangled the former boxing champion with her purse strap as he drunkenly slept.

Her lawyer told The Associated Press on Tuesday he petitioned a court to release Amanda Rodrigues while the investigation continues. Celio Avelino expects the court in Recife to rule on Wednesday at the earliest.

Rodrigues told investigators she awoke Saturday about 6 a.m. to find her husband's body in the apartment they rented in Porto de Galinhas, a seaside resort in Pernambuco state. She then called police, which Avelino said indicates her willingness to help authorities.

But police said she was the only suspect and they are certain she killed Gatti in their apartment where they and their 10-month-old son arrived for a second honeymoon last week. The boy was unhurt and was in the care of Rodrigues' family.

Rodrigues originally met Gatti while she was working as an exotic dancer in Brazil. Gatti's friends had reported their relationship as tempestuous and rife with jealousy-fueled arguments.

Police spokeswoman Milena Saraiva told the AP the death may have even been premeditated and Rodrigues may have encouraged Gatti to drink excessively so she would be able to overpower him later.

"He was very drunk and that made it easier for her," Saraiva said. "He was sleeping when she did this. She waited for the moment when he was drunk enough for her to do it."

Saraiva stressed this was just one theory police were considering.

She also said Gatti's body was released to his brother and it was her understanding the body would be flown to Canada on Wednesday.

Rodrigues told police she had a fight with Gatti after dinner on Friday and he pushed her to the ground, resulting in minor injuries to her elbow and chin. Witnesses also reported to police the couple fought and Gatti was drunk.

Police said Gatti had marks on his throat, indicating he was strangled, and a knife wound to the back of his head. They displayed a bloodied, white purse strap that was found near Gatti's body, along with a small steak knife.

Saraiva said she could not confirm if Gatti was first strangled and then cut with the knife, or the opposite.

Those close to Gatti in the United States said they were mystified by what happened, though they knew his relationship with Rodrigues was rocky.

"What I've been hearing is that him and the girl fought a lot," said Buddy McGirt, Gatti's one-time trainer. "Whatever it is, it's crazy. If they fought that much, leave the person. You don't kill them or have someone else kill them."

Former boxing champion Ray "Boom Boom" Mancini said he didn't know Rodrigues, but he knew Gatti, like many boxers, was prone to drink and party to excess.

"You could see, a lot of guys are tortured, man, they live a lifestyle," Mancini said. "I don't know if it's them or how they think they're expected to act. But they all want that rock star life."