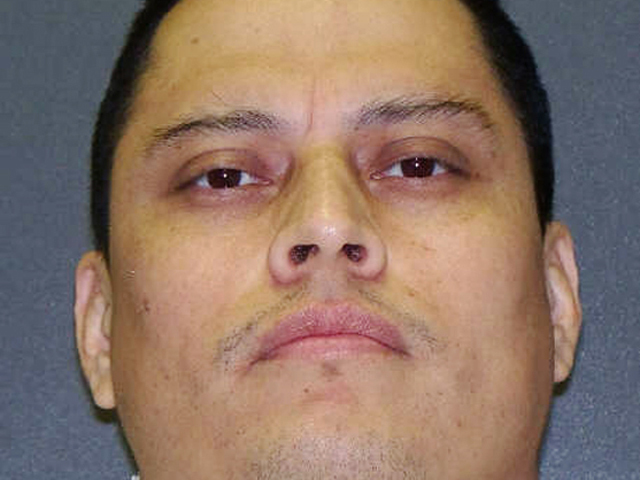 (AP) HUNTSVILLE, Texas - A South Texas man was put to death Thursday for a slaying 14 years ago in which the victim was bound with shoelaces and strips of bedding, stabbed 94 times and robbed of $50.

The execution of Arturo Diaz, 37, was carried out after the U.S. Supreme Court refused a last-ditch appeal to block his death by lethal injection. It was the 13th execution this year in Texas, the nation's most active capital punishment state.

Diaz smiled and blew a kiss to several witnesses watching through a window, including his mother and grandmother.

He then turned to the father of his victim, watching through an adjacent window to the death chamber. "I hope this can bring some relief for you and your family," he told him.

He spoke in Spanish to his own friends and relatives, telling them: "I am with God."

He also added that he hoped his fate "serves as an example for some youngsters. ... Think about it before you do drugs."

"It was way too easy," Forrest Nichols, whose son was murdered in 1999, said as he stood watching Diaz.

Texas Department of Criminal Justice officials have used pentobarbital as the single execution drug for more than a year, but Diaz became the first in the state given the sedative procured from a vendor or manufacturer the prison agency has declined to identify.

Diaz's reaction to the drug was similar to other Texas inmates who have been executed with pentobarbital. He took several deep breaths, began snoring and ceased movement in less than a minute.

The expiration date of the department's existing inventory passed this month, possibly diluting its potency. Like other death penalty states, Texas officials needed to go to nontraditional sources because the usual suppliers bowed to pressure from capital punishment opponents and refused to make their product available.

In his appeal to the Supreme Court, Diaz's attorney, James Terry Jr., argued recent high court rulings allowed another look at previously unsuccessful appeals where inmates had shoddy legal help. Diaz had deficient counsel at his 2000 trial in Hidalgo County and early in the appeals process, his attorney said.

Diaz, from Las Milpas, a small town between McAllen and the Mexican border, was convicted of the April 1999 slaying of Michael Nichols, 25, at Nichols' apartment in McAllen. Diaz also was given two life terms for attempted capital murder and aggravated robbery of another man who survived.

Cregg Thompson, the lead prosecutor at Diaz's murder trial, said evidence showed Diaz tried to steal Nichols' pickup truck but couldn't open a locked gate at the apartment complex. His shoe print was found on the keypad box at the gate, and his DNA was found on a beer bottle at Nichols' apartment.

Diaz said he was high on drugs and alcohol during the attack on Nichols. He also confessed to a slaying that took place a month earlier. In that case, the victim's head was stomped and face beaten with a hammer. Diaz also received a 94-year prison term for aggravated sexual assault for raping a jail inmate.

"You know it's going to take some time for all the appeals and everything to go through," Thompson said this week of Diaz's execution. "But when you say 14 years, that sounds like an awful long time."