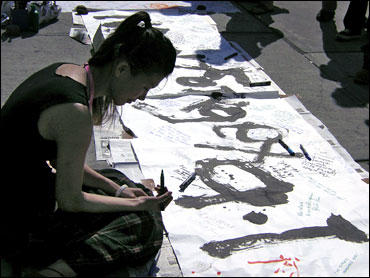 
On the fourth anniversary of the 9/11 attacks this weekend, New York City memorialized victims by ringing a bell at Ground Zero, reading names of the dead and offering countless prayer services — just as it did last year and the year before that. But a new cavern of remembrance appears to be opening up as the public continues to heal and art influenced by Sept. 11, 2001, is steaming out.

Galleries and museums in Lower Manhattan are opening to the public what seems to be the first major outpouring of 9/11-inspired print and performance art.

Much of this outpouring can be attributed to the artistic community built by the Lower Manhattan Cultural Council, a nonprofit arts-funding group that was housed in the World Trade Center and lost one of its artists when the towers collapsed. To rekindle memory and awaken ideas this year, the council hosted an arts summit over the Sept. 11 weekend and opened art shows in several major exhibition spaces.
"There are many ways of remembering a day — the reading of names, tributes, those are all important ways — but there are cultural ways that make us remember and reflect enough to work to make sure history doesn't repeat," Radhika Subramanian, director of cultural programs for the center, told CBSNews.com. Subramanian organized the weekend summit of more than 60 artists and cultural leaders.

One of those featured in the center's exhibit "What Comes After: Cities, Art and Recovery" is performance artist Pia Lindman. Four years ago, on Sept. 11, 2001, Lindman saw from Lower Manhattan the horror of towering flames and mass death after terrorists flew planes into the World Trade Center. The attack played out like a movie, but then 9/11 ripped into her life.

Lindman, a downtown New York resident, was told hours after the attack that she would not be able to return to her apartment — indefinitely. As an evacuee who lost a colleague that day, Lindman knew 9/11 was affecting her life, and would, therefore, affect her art.

So did singer Athena Masci.

"Of course 9/11 affected me heavily," Masci said after performing a song she wrote about the psychological stresses encountered by Iraq war soldiers. She performed as part of the September 11 Musical Celebration. "I think any artist living in New York then would say the same."

Lindman's Sunday performance was, like Masci's, not a reflection on the terrorist attacks as a singular event, but rather a comment on what she sees as global political and social repercussions of 9/11.

"Nothing has stopped. Suffering and trauma have not stopped," Lindman said. "The repercussions of 9/11 are so much greater than just that day, and they affect all parts of the world — some much more than we feel here in New York."

Lindman, who was born in Finland, said she was inspired to trace newspaper images of mourning by the facial and bodily expressions of Ground Zero visitors that she observed. Using her sketchbook as a guide during performances, Lindman poses her body into likenesses of mourners.

Another performance piece the cultural center exhibited is a bulky and eerily official-looking collection of wearable emergency supplies by Peggy Diggs. When worn (she paraded the outfit past Ground Zero), it resembles a mesh firefighter's outfit with dozens of pockets.

Other spaces drawing attention to artists' reflection on 9/11 include Apex Art, a downtown gallery featuring an exhibit inspired by signs and language found immediately after 9/11, and Cooper Union, which, along with another museum, is showing a large collection of art previously investigated or confiscated by the FBI.

This sort of exhibit shows that 9/11 has left not only emotional scars that inspire expressive art, but also sweeping social ones than can prompt reactionary art shows. But the social changes extend far beyond the art community: Most Americans, from bankers to farmers, see terror as a way of life in the United States, a CBS News poll has found. Seventy-nine percent of those surveyed said they expect Americans will always have to live with the threat of terrorism.

That's true for citizens of other countries, too, said Lindman, who performs poses from photographs taken all over the world.

The Lower Manhattan Cultural Council show featured New York-based artists who consider themselves multi-national. Conor McGrady, a Brooklyn-based artist who was born in Ireland, made a series of black-and-white barebones illustrations of structures. Although none of the sketches resembles the World Trade Center, they remind viewers of public surveillance and of structure: what makes a building stand up.

Chitra Ganesh and Mariam Ghani, two collaborating artists who also showed work on Sept. 11, 2005, said their inspiration came from the government's detention of suspected terrorists — and from their thought that the Immigration and Naturalization Service wrongfully netted and detained hundreds of immigrants in the wake of 9/11. When the INS released a list of detainees to comply with a Freedom of Information Act request, it was so heavily redacted that "there was nothing left but blank space," Ghani said. "These people had been erased. So I felt something else needed to be created out of that."

From where Ghani spoke in a Lower Manhattan performance space, another void – one that four years later has inspired countless artists to create – could be seen out the window.