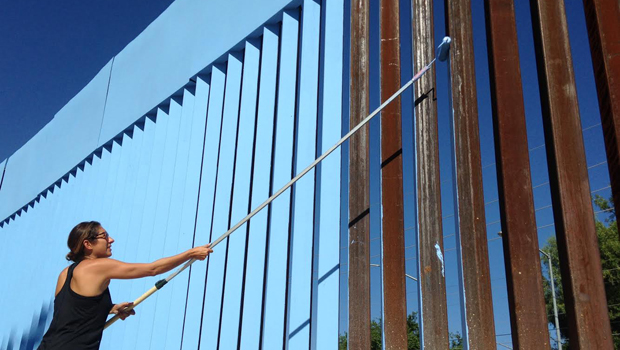 NOGALES, Mexico -- Armed with sky-blue paint, artist Ana Teresa Fernández began to "erase" the border fence that splits up Mexico and the U.S. on Tuesday.

Fernández, who was born in Mexico but raised in San Diego, is leading an effort to paint the border fence in Nogales, Sonora, so blue that it blends with the sky, rendering it nearly invisible. Nogales sits on the border with Nogales, Arizona.

Fernández solicited the help of about 30 volunteers who helped paint.

"This wall has become a symbol of pain, a symbol where we lament the lives who have not been able to cross it," Fernández said.

The artist wants to use her painting as a visual platform of migrant and human rights on an international level.

"For me, the border, the border wall, is like a tombstone," she said.

Neither the Mexican or U.S. authorities interrupted the painters as they covered a little over 30 feet of fencing with blue paint.

"It's not erasing the border, it's pulling the sky down to us," the 34-year-old said.

This isn't the first time Fernández "pulls down they sky."

Tuesday's project attracted the attention of Luis Guerra, an immigrant who was deported. Guerra lived in the U.S. since he was 13 years old and has U.S.-born children. The 36-year-old said he can't enter to the U.S. to see his family.

Guerra volunteered to paint on Tuesday.

Susannah Castro, of Border Community Alliance, invited Fernández to take on this project. She said Mexican authorities were made aware of the project and didn't object.

"We're not doing anything illegal. We're an humanitarian organization and we're not gonna shy away from these topics," Castro said.

Added Fernández: "The role of an artist is to make sure people don't become compliant."