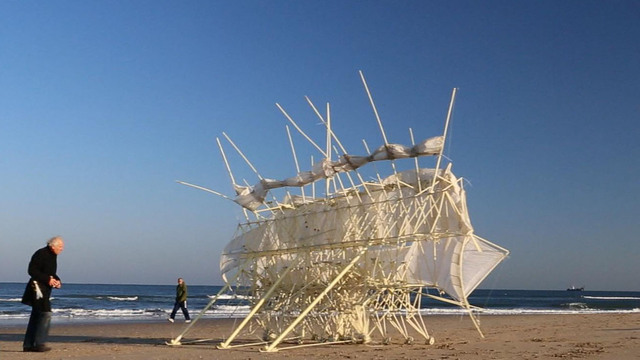 Artist and engineer Theo Jansen has invented a new species on earth called "Strandbeests." A Strandbeest--Dutch for "beast creature"--is an intricate collection of PVC pipes, fastened together with plastic ties. They are designed to scoot across beaches by wind power.

"You can imagine them as -- as animals. And it's--it's a game, in fact. After a while, if you play a game long enough, it becomes real," Jansen said.

Jansen has spent 25 years tinkering with the design of his beests, making them seem more real and alive. They reflect a strange mix of real-life creatures--part insect, part crab, part horse.

But the key to their life-like movements is in Jansen's sophisticated design of the legs.

"A leg shouldn't spend too much time in the air. It should go to the ground quickly and give support to the animal again," Jansen said. "So, that's what these animals do. That might be the reason why it looks very much like the movement of real animals' legs."

While Strandbeests' original habitat were the beaches of Europe, the species have been spotted in Massachusetts, where they recently invaded a plaza near Boston. The beests received an enthusiastic welcome, which Jansen compared to a child's excitement.

"For a child--life is new, right? Every experience is new. And if you see something new, you forget you're grown up. And the child comes back," he said.

The beests were there for a talk Jansen gave at the Massachusetts Institute of Technology. Their ability to move smoothly, almost effortlessly, captured the imaginations of engineers and physicists there.

But the beests are also equally as awe-inspiring as works of art, which is why the Peabody Essex Museum is displaying them in an interactive exhibition.

"It reminds people of the power of their own creativity," said the museum's contemporary art curator, Trevor Smith. "Theo ... is a person whose creativity doesn't respect those boundaries of 'This is art, this is science, this is storytelling,' but instead is this wonderful amalgam of all three of those things."

Jansen is taking steps to make sure the Strandbeests continue to "live in the future" even after he is gone by helping them "reproduce" and evolve. He explains how to store the wind energy and how the legs work on his website, to encourage people to create their own beests.

And people are already picking this up by creating renditions such as "Hackbeests"--beests made of Legos, or ones that are hamster-powered.

Still, there is nothing quite like the majesty of Jansen's original creations. They will be available at the Peabody Essex Museum until January, before scuttling their way to Chicago, then San Francisco.