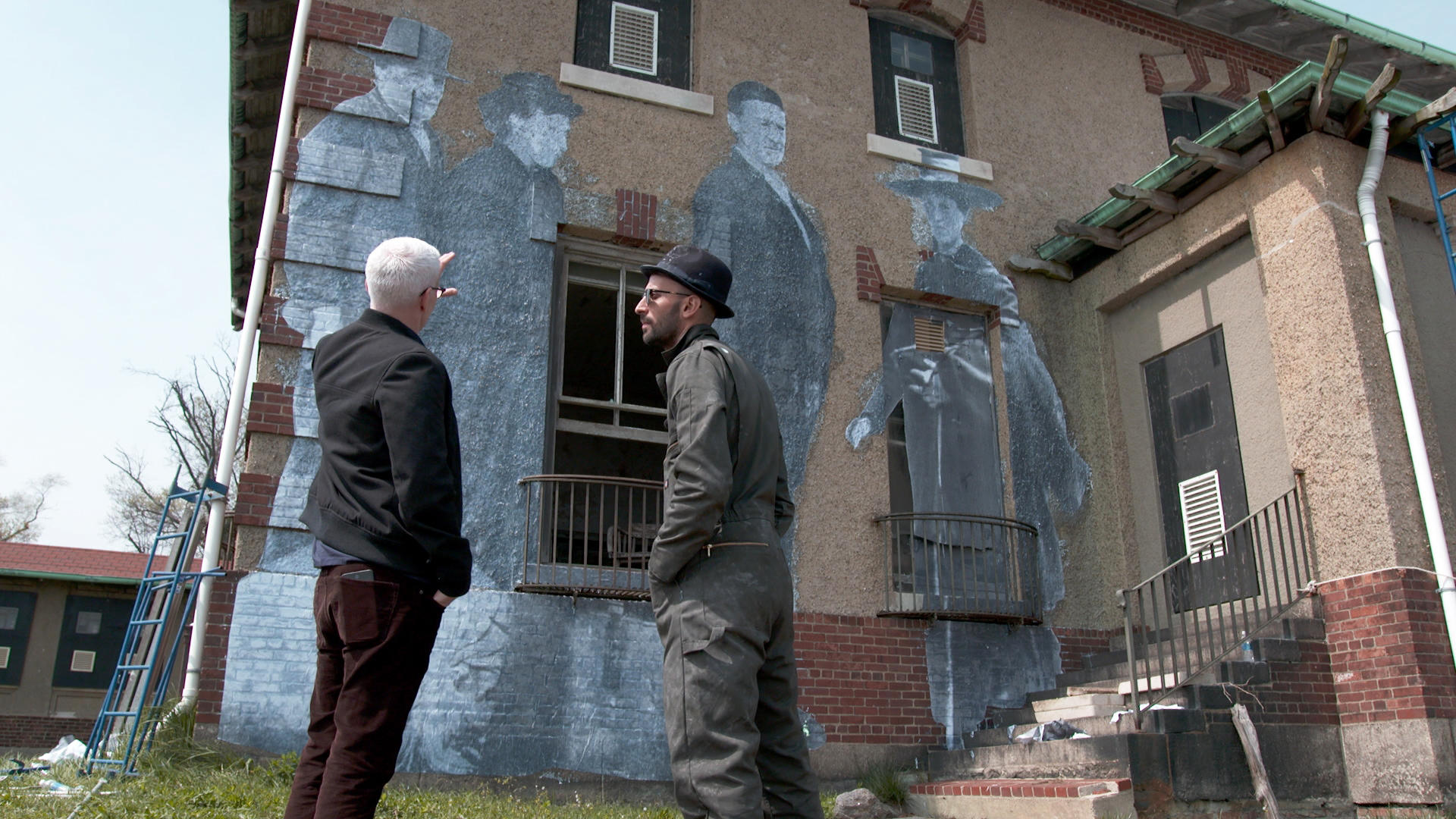 The building is derelict. On the walls, paint peels, illuminated only by what sunlight peeks through the grimy windows. Time has worn the floors. The filing cabinets, covered in dirt and dust, have been sitting empty for decades. Rust peppers the metal lockers.

But turn a corner, and see something remarkable: A group of men, dressed in fine hats and overcoats, appears to ascend the stairs. The sound of the wooden steps creaking under their weight is almost audible. Close a shabby door, and a young girl stares back, her hands folded calmly in front of her. In another vacant room, a family of three gazes out the window. Over their shoulders rises the Statue of Liberty, the symbol of a new life just out of reach.

These black-and-white photographs feature some of the 12 million immigrants who passed through New York Harbor from the late 19th century to the mid-20th century. They're part of an installation by French street artist JR, who blew them up to life-size and pasted them in the former Ellis Island Immigrant Hospital, where they bring new life to the abandoned building. He also used photos of doctors and nurses who worked at the hospital.

The infirmary was the first stop for many of those looking for a new life in America. If immigrants had even a hint of illness, officers deemed them unfit for entry into the country and sent them to the hospital. Through the windows, views of the Statue of Liberty and the New York City skyline taunted some migrants who would eventually be sent back to their homeland.

"In that place you feel a lot of broken dreams of people who crossed the entire world and either died here, [or] had to go back to where they [came] from," JR tells Anderson Cooper, who toured the abandoned building with the artist and a 60 Minutes crew two years ago.

The National Park Service oversees Ellis Island and granted JR permission to paste his installation inside the abandoned hospital. As he worked, he connected the past to the present. The child of immigrants himself, he wondered: Where is the Ellis Island of today?

That gave him an idea.

He would return to Ellis Island and post photos on the outside of the hospital — only this time, they would show modern-day migrants. The National Park Service again gave him permission, but only if he used archival photos of turn-of-the-century immigrants, as he did before.

He agreed — to a degree.

"I think JR kind of dug into a little bit of his street-smart old ways, where he used to be a graffiti artist and he would do things, you know, that were a little bit illicit," says Magalie Laguerre-Wilkinson, who produced Cooper's profile of JR on 60 Minutes this week.

For his second installation at the hospital, JR did something he rarely does: He tweaked the photos. He used the bodies of 19th and 20th-century migrants but swapped their faces with those of modern-day Syrians that he had recently photographed at a refugee camp in Jordan.

In the video above, Cooper asks him if the people in charge of Ellis Island knew about his trick before he began pasting the images.

No one told him the faces didn't belong.

"There's a lot of people in the world that we don't see, that we choose not to look at, that we choose to pass on the street," Cooper says. "We choose to think we know them, and then they're actually very different. And I think he challenges that, and I think that's one of the interesting things about him."

The video above was originally published on February 25, 2018 and was produced by Ann Silvio, Brit McCandless Farmer, and Will Croxton. It was edited by Will Croxton.

Prince Harry describes how he found out about his mother's death
Thanks for reading CBS NEWS.
Create your free account or log in
for more features.
View CBS News In
CBS News App Open
Chrome Safari Continue
Be the first to know
Get browser notifications for breaking news, live events, and exclusive reporting.