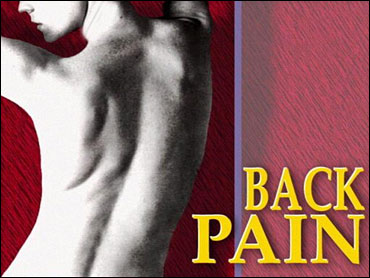 Russ Rice's back pain was so intense he could hardly walk. Two surgeries had failed to offer lasting help for his damaged spinal disc, and only large doses of painkillers got him through each day.

Then, as part of a study, doctors implanted an artificial disc in Rice's back. Just four days later, the California man returned to work, pain-free for the first time in over a year.

Artificial discs have long been used in Europe but remain experimental in this country. Two major studies nearing completion could change that: For the first time, scientists will know just how such implants compare to the only other alternative patients like Rice have had - major surgery to fuse together two vertebrae in the lower back.

Preliminary results are promising enough that doctors expect one artificial back disc to be on the U.S. market as early as next year.

Researchers aren't stopping there: Studies recently began of artificial discs designed for the more delicate neck, which don't bear as heavy a load but must be more moveable. And scientists hope to begin studies within a year of injections of collagen-like material to prop up a collapsing disc, buying time before more surgery is needed.

The bones of the spine have spongy discs between them - tough collagen rings surrounding a fluid-filled cushion - that act as shock absorbers, keeping verterbrae properly separated, cushioned and flexible.

But a disc damaged from injury or aging can cause intense pain, especially if nearby nerves are crunched or the disc degenerates enough that bone grinds on bone.

Back pain affects millions of Americans, and a degenerating disc is one of the main reasons. Time to heal and painkillers help most recover; some need special exercises.

But a small percentage need surgery, called a microdiscectomy, to remove damaged pieces.

When even that doesn't help, more than 200,000 Americans a year undergo spinal fusion - completely removing the degenerated disc and grafting the bones on either side together. It eases pain, but causes a problem: Freezing proper spinal motion puts more pressure on other discs below that spot. As many as 20 percent of fusion recipients need surgery for another disc problem in the next 10 years, says Dr. John Regan of Los Angeles' Cedars-Sinai Medical Center.

The hope is that an artificial disc, by allowing more movement, won't have that problem.

Then in the late 1980s, European scientists developed different materials that stayed in place until they grew into the bone - and tracking of European patients suggests those discs offer significant pain relief with few side effects.

Two European models - the SB Charite and Prodisc - are the furthest in U.S. studies that, unlike the European research, directly compare the implants to spinal fusion to prove whether the artificial disc is as effective and safe as standard treatment.

Results of the Charite study - comparing how 300 patients fared two years after surgery - are due in December, and the Food and Drug Administration is expected to evaluate that disc next year, Regan says.

Prodisc is still under study at about a dozen U.S. hospitals.

The discs are similar - metal plates pressed into the surrounding vertebrae that hold in place a soft plastic cushion. Preliminary results from both are promising, say Regan, who is studying the Charite (pronounced shar-ee-TEH) disc, and Prodisc investigator Bradford.

However those studies turn out, doctors already know recovery from disc implantation is faster: Implant recipients are encouraged to start moving around the same day, while fusion patients are put in a back brace for three months while their bones meld.

"I'm only 40, so I didn't want a fusion - really, you're never the same after that," said Rice, a Santa Clarita, Calif., business executive who was dreading a plane trip abroad to get an artificial disc when he learned Regan had an opening.

He needed a midday nap for about a week after returning to work, but otherwise rapidly recovered. "Every day I wake up and I just thank the Lord because I'm like a new guy," he says.