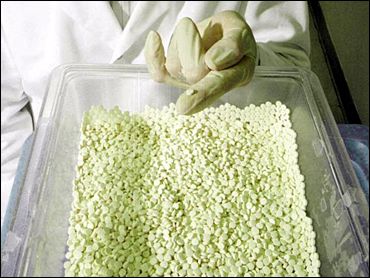 Pharmaceutical giant Merck & Co. is pulling its blockbuster arthritis drug Vioxx from the market worldwide because new data from a clinical trial found an increased risk of heart attack and stroke.

Merck said Thursday that data from the trial showed the increased risk of heart attack and other cardiovascular complications began 18 months after patients started taking Vioxx.

The data comes from a three-year study aimed at showing that Vioxx at a 25 milligram dose prevents recurrence of polyps in the colon and rectum. The trial was stopped after Merck discovered the higher heart risk compared to patients taking dummy pills.

"We're taking this action because we believe it best serves the interest of patients," Ray V. Gilmartin, Merck's chairman, president and chief executive officer, said in a prepared statement.

"Although we believe it would have been possible to continue to market Vioxx with labeling that would incorporate these new data, given the availability of alternative therapies and the questions raised by the data, we concluded that a voluntary withdrawal is the responsible course to take," he said.

The Wall Street Journal reported last month that a study financed by the federal government has found that Vioxx may cause serious heart problems.

As a result, a large HMO, Kaiser Permanente, was reconsidering its use of the drug.

The study added to the mounting safety questions surrounding Vioxx, and is expected to boost its biggest rival, Pfizer's Celebrex.

CBS News Correspondent Sharyl Attkisson reports experts flagged a heart issue as far back as 1999, when Merck's own pre-trial study of Vioxx revealed significantly more heart attacks and strokes than a competitor.

"If I were sitting on the FDA what I think what I would do is really urge physicians not to use higher doses of this agent Vioxx, and really reconsider even using the lower doses," said Dr. Deepak L Bhatt, a Cleveland Clinic cardiologist.

Dr. David Graham, the lead FDA scientist on the government study, was so concerned, he told reporters: "I don't think doctors should prescribe high doses of Vioxx, and patients shouldn't take it."

The FDA last month told CBS News it planned no immediate action on Vioxx, and that heart risks are already mentioned on the drug's label.

Vioxx is one of Merck's most important drugs, with $2.5 billion in sales in 2003. But sales dipped 18 percent in the second quarter of this year to $653 million.