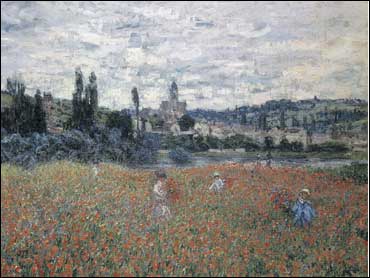 Two Impressionist paintings stolen in one of Europe's largest art thefts have been recovered in an abandoned car, Swiss police said Tuesday.

The pictures, by Vincent van Gogh and Claude Monet, were among four paintings worth $163 million that were stolen from a private museum in a Feb. 10 armed robbery.

Officials declined to comment on whether a ransom was paid for the paintings' return.

The two recovered paintings — Monet's "Poppy field at Vetheuil" and van Gogh's "Blooming Chestnut Branches" — were in good condition and still under the glass behind which they were displayed in the museum, he said.

The pictures were identified by museum director Lukas Gloor after a thorough inspection, Hotzenkoecherle said.

The paintings were discovered in a parking lot in front of a Zurich mental hospital on Monday. It was unknown how long the white sedan had been there, he said.

Together the recovered paintings are worth $64 million, Zurich police spokesman Marco Cortesi said.

"I am incredibly relieved that two paintings have returned," Gloor told a news conference. "We're very happy that both the paintings are in absolutely impeccable shape."

"But we must not forget," he added, "that two more paintings of our collection are still missing, including our collection's landmark 'Boy in the Red Waistcoat."'

That painting, by Cezanne, alone was worth $91 million. The remaining painting is Degas' "Ludovic Lepic and his Daughter."

Cortesi, after the news conference, was asked by The Associated Press whether a ransom had been paid.

"It is unknown whether a sum of money has moved," Cortesi responded.

Then Gloor, who was standing next to him, said, "I can't give any information on that."

Swiss news media quoted unidentified eye witnesses as saying they could see the pictures on the back seat of the car, which caught the attention of the building supervisor of the Psychiatric University Clinic because the vehicle was unlocked.

Cortesi said it was unclear how long the car had been standing on the parking lot, and he declined to comment on the vehicle's origin in order not to compromise the investigation.

But he said the car had Zurich license plates that had been stolen.

"Connections with other arts thefts in the country and abroad are being examined," said Cortesi.

A large police operation followed the discovery of the car, with the hospital grounds sealed off and forensic experts going over the vehicle meticulously before it was towed away.

Police had said initially that such a white vehicle may have been used by the three robbers when they made their escape with the four paintings from the museum. The clinic is about 500 meters from the museum.

Interpol, which has been coordinating the international search for the paintings, said it was unable to comment on any developments because that would be up to Swiss authorities.