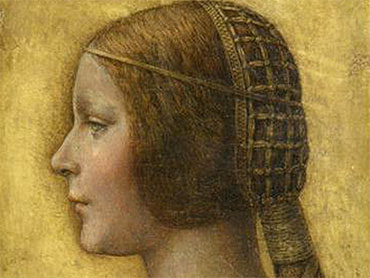 Art experts believe they have identified a new Leonardo da Vinci - in part by examining a fingerprint on the canvas.

Peter Paul Biro, a Montreal-based forensic art expert, said Tuesday that a fingerprint on what was presumed to be a 19th-century German painting of a young woman has convinced art experts that it's actually a da Vinci.

Canadian-born art collector Peter Silverman bought "Profile of the Bella Principessa" at the Ganz gallery in New York on behalf of an anonymous Swiss collector in 2007 for about $19,000. New York art dealer Kate Ganz had owned it for about 11 years after buying it at auction for a similar price.

One London art dealer now says it could be worth more than $150 million.

If experts are correct, it will be the first major work by da Vinci to be identified in 100 years.

Biro said the print of an index or middle finger was found on the painting and that it matched a fingerprint from da Vinci's St Jerome in the Vatican. Biro examined multispectral images of the painting taken by the Luminere Technology laboratory in Paris. The lab used a special digital scanner to show successive layers of the work.

"Leonardo used his hands liberally and frequently as part of his painting technique. His fingerprints are found on many of his works," Biro said. "I was able to make use of multispectral images to make a little smudge a very readable fingerprint."

Technical, stylistic and material composition evidence also point to it being a da Vinci. Biro said there's strong consensus among art experts that it is a da Vinci painting.

"I would say it is priceless. There aren't that many Leonardo's in existence," Biro said. He said he had heard that one London dealer felt it could be worth 100 million British pounds (more than $150 million).

Silverman said his Swiss friend saw it first and told him it didn't look like a 19th century painting. When Silverman took a look at the painting at the Ganz gallery in 2007, he thought it might be a da Vinci, although that seemed far-fetched. He hurriedly bought the painting for his Swiss friend and then started researching it.

"Of course you say, 'Come on, that's ridiculous. There's no such thing as a da Vinci floating around,"' Silverman said in a telephone interview with The Associated Press. "I started looking in the areas around da Vinci and all the people who could have possibly done it and through elimination I came back to da Vinci."

Last year, Silverman bumped into Nicholas Turner, a former curator of drawings at the J. Paul Getty Museum and the British Museum. Turner said it was a da Vinci and other leading art experts have backed it up as well.

Silverman said thanks to the fingerprint image at the Luminere Technology laboratory it was confirmed.

"That was icing on the cake," he said.

Silverman describes the Swiss private collector as a very rich man who has promised to buy him "lunch and dinner and caviar for the rest of my life if it ever does get sold."