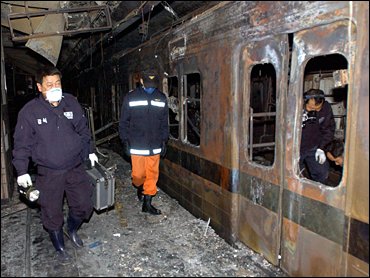 The horror is multiplying in an arson attack on a subway car in Daegu, South Korea, where the death toll is at least 120, but more bodies are believed still in the wreckage. A suspect is in custody.

The Korean television network YTN reports that the suspect worked as truck driver and had once threatened to burn down the hospital where he had received unsatisfactory treatment.

The blaze was apparently started by a man with a milk carton filled with some kind of flammable liquid, according to authorities, who got eyewitness accounts from passengers trapped in the burning subway frantically calling for help on their cell phones.

The fire started in one six-car train in a subway station but then spread to another train that had stopped in the same station.

"We are receiving reports from firefighters at the scene that there are about 100 bodies inside the train cars," said Chung Myong-sook, a firefighter in Daegu.

Police confirmed the existence of further bodies, but said the number was uncertain.

"There are bodies inside the train cars, but we don't know how many there are, whether it's about a hundred or dozens," said Kim Young-nan, a police lieutenant in Daegu.

Firefighters gave horrifying accounts of the scene underground: bodies of victims asphyxiated as they tried to escape up the stairs; on the platform were the bones of those trapped in the flames, burned the white of ash.

"I brought up four bodies and they were already dead, lying on the stairs," said Park Chang-shik, 45.

Authorities said that the fire was extinguished by 1 p.m., about three hours after it started. The acrid odor of burned plastic, however, still wafted over the fire scene hours after the flames had been put out.

The injured were rushed to nearby hospitals, said Kim Byong-hak, a police lieutenant in Daegu. Some of the injured are reported to be in serious condition.

Kim Bok-sun, 45, said her missing daughter, 21-year-old Kang Yeon-ju, was on the burning train and called in a panic.

"She only said that there was a fire and the train door wasn't opening, so I told her to just break open a window and get out," she said, her voice trembling with emotion. Kim called her daughter back a few minutes later, "but she never answered the phone."

Police identify the suspect in custody as Kim Dae-han, 46, who witnesses said carried a milk carton box filled with flammable material into a subway car.

"When the man tried to use a cigarette lighter to light the box, some passengers tied to stop him. Apparently a scuffle erupted and the box exploded into flames," said Daegu police Lt. Kim Byong-hak.

The Korean television network YTN aired footage of the frantic scene inside a nearby hospital reportedly showing the suspect being attended to by nurses. The man sat frowning on a bed wearing what appeared to be a hospital smock, his face and hands smudged from soot from the fire.

Yu Heung-soo, a police sergeant in Daegu, said Kim was burned on both legs and his right wrist, but YTN quoted a doctor as saying that his only injury was toxic gas and smoke inhalation.

Fire department officials said some 3,200 people had been mobilized to battle the blaze and rescue victims, including nearly 1,000 firefighters and more than that number of police officers.

In the minutes after the fire began, thick black smoke billowed out of ventilator shafts of the subway. Downtown traffic came to a standstill as ambulances rushed to the scene. Orange suit-clad firefighters wearing oxygen tanks rushed into the subway.

Rescuers brought victims, their faces and clothes black with soot, up to the street in stretchers and slid them into ambulances. One witness detailed the terrifying scene inside the subway as the fire ignited.

"The man kept flickering a lighter and an old man told him to stop. The man dropped the lighter and the train caught fire," an unidentified male survivor told YTN. "Several young men seized him, but the fire spread and black smoke rose. Then everyone rushed out."

The subway was filled with toxic gas, impeding rescue operations.

One man told the Korean television network YTN that his friend called on his cell phone and said he was trapped inside one of the cars. The unidentified man told YTN that he had called subway officials and they were unaware of the fire at the time.

Daegu, one of the 10 World Cup soccer venues last year, is the third largest city in South Korea with a population of 2.5 million. The city is also a venue for this year's World University Games on Aug. 21-31.

In 1995, a gas explosion in a subway construction site in the city killed 101 people and injured 143 others.

In South Korea's last major fire disaster, 55 people were killed in a beer hall in Incheon, near Seoul, in October 1999.