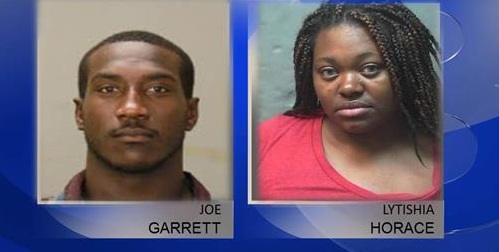 HARRIS COUNTY, Ga. -- Police have arrested one of the two women riding in the car with a man accused of shooting a sheriff's deputy in the face during a traffic stop south of Atlanta.

WTVM-TV reports that Lytishia Horace was being held Sunday as a fugitive from justice at the Russell County Jail in Alabama while waiting to be extradited to Georgia in connection to the shooting of deputy Jamie White.

Harris County Sheriff Mike Jolley says that at about 7:30 p.m. Saturday White took Joe Lee Garrett's driver's license and spoke with him and the front seat passenger for about seven minutes.

The 24-year-old Garrett then pulled out a gun and shot White above the left eye. Once White was shot, Garrett exited the vehicle, got his license and drove away.

Police said three people were inside a 1994 blue Chevrolet Caprice on I-85 southbound, about 80 miles south of downtown Atlanta, when they were stopped by the deputy.

Police say Garrett turned himself in in Alabama just hours after the shooting happened and is being charged with aggravated assault on a police officer, and is currently being held as a fugitive from justice.

Harris County officials tell CBS affiliate WRBL that Garrett admitted to shooting the deputy during the traffic stop. However, he did not identify the two other women in the car at the time of the incident.

Garrett is scheduled to have a court hearing Monday, after which he'll be taken back to Harris County.

Garrett and Horace are both in jail without bond.

Jolley said Sunday that deputy Jamie White's condition has improved. Jolley said he is "doing much better" but may lose his left eye.

"Thank God the bullet didn't hit his brain," he said.

Jolley said White had been part of the Harris County Sheriff's Office for more than two years and had previously served in North Georgia.