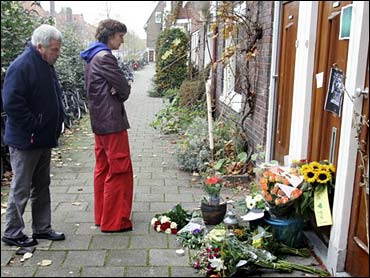 The suspects were detained in the 24 hours following Van Gogh's killing while he bicycled on an Amsterdam street, prosecution spokeswoman Dop Kruimel told The Associated Press.

Six detainees are of Moroccan origin, one is Algerian and the other has dual Spanish-Moroccan nationality, she said.

The suspect in the killing — a 26-year-old suspected Muslim extremist with dual Moroccan-Dutch citizenship — was arrested Tuesday after a shootout with police. The unidentified suspect was wounded in the leg.

Kruimel said the suspects, whose identities were not released, were detained and released during an October 2003 investigation into a potential terrorist threat.

"The suspects were detained at a number of residences searched in connection with the Van Gogh investigation," Kruimel said. "They were previously known to us. As of now only one suspect is being held for Van Gogh's murder, but the investigation will determine if others may have been connected."

Van Gogh, 47, who received death threats after his recent movie sharply criticized how women are treated under Islam, was repeatedly shot and stabbed to death on an Amsterdam street Tuesday.

Another Dutch newspaper, the Telegraaf daily, carried a large color photograph of Van Gogh's body with a knife protruding from his chest under the headline "Butchered."

"We're not going to take this," the Dagblad said.

The paper said the killer shot Van Gogh eight or nine times, then calmly slipped his weapon in the pocket of a beige raincoat before bending over his victim and slitting his throat.

Dutch Justice Minister Piet Hein Donner said the suspect "acted out of radical Islamic fundamentalist convictions" and added that he had contacts with a group that was under surveillance by the Dutch secret service.

Azzouz was among those arrested in October 2003 but released for lack of evidence. He was re-arrested in June.

On Wednesday, well-wishers brought hundreds of flowers to the spot where Van Gogh was slain. Others brought beer, cigarettes and cactus plants — a reference to Van Gogh's prickly artistic nature and his habit of giving guests on his television talk show a cactus as a gift.

"This is an attack on my country," said Masite Halici, a young Dutch woman who came with a rose. "I didn't enjoy his art at all, but we need people who stand up for what they think."

Van Gogh — an award-winning filmmaker, television producer and newspaper columnist — once mocked a prominent Dutch Jew, referred to Jesus as "the rotten fish" of Nazareth and called a radical Muslim politician "Allah's pimp."

The great-grandson of painter Vincent Van Gogh's brother released the fictional film "Submission" in August about a Muslim woman who was beaten and sexually abused, drawing the ire of some Muslims and generating death threats against him.

In the fictional story, a veiled Muslim woman spoke about her violent marriage, being raped by a relative and later brutally punished for adultery. In some scenes, the actress' naked body is shown through a transparent gown. One scene shows her body with Quranic verses written on it.

Some Muslims and women's groups said the movie's depiction of the abuse of women was insensitive.

In a recent radio interview, Van Gogh, a chain-smoking social critic and satirist, dismissed the threats and called the movie "the best protection I could have. It's not something I worry about."

Police kept watch on Van Gogh's house immediately after the film's airing but dropped that precaution because there was no concrete evidence of a threat.

The English-language film was written by Somali-born Ayaan Hirsi Ali, a lawmaker who has outraged Muslims by criticizing Islamic customs and the failure of Muslim families to adopt Dutch ways.

Her spokeswoman, Ingrid Pouw, said Hirsi Ali was "deeply shocked" by the slaying.

About 20,000 people poured into Amsterdam's central square to protest the attack. Many blew horns and whistles and banged pots and pans.

The government held late-night crisis meetings and the Immigration Minister met with Muslim groups to discuss how to avoid violent confrontations with the Muslim community.

Dutch Muslim groups condemned the killing and called for reconciliation, expressing fears of possible reprisals against Muslims. Several Muslim groups planned rallies in the Dutch capital to protest the attack.

Van Gogh's killing came at a time of increased tensions in the Netherlands, where many blame violent crime on the Muslim minority, mainly made up of immigrants.

The killing instantly recalled the assassination of anti-immigration politician Pim Fortuyn, who was killed in 2002 by an animal-rights activist.

In the aftermath of Fortuyn's assassination, 10 percent of the Dutch electorate voted for his anti-immigration party, and during the last two years the Netherlands has taken the toughest measures in the European Union to clamp down on immigration.