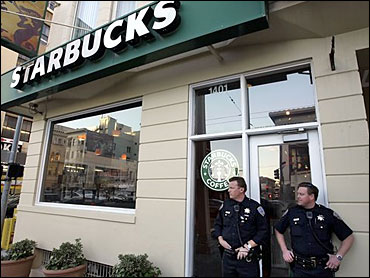 A 44-year-old man was arrested Tuesday night on suspicion of planting an explosive device in the bathroom of a Starbucks coffee shop, police said.

"There is no connection to any terrorism or anything against Starbucks," Sgt. Neville Gittens said. "Everything at this point and time indicates that this particular individual acted alone and this is an isolated incident."

Authorities were called around 1:15 p.m. Monday, after an employee reported finding something suspicious in the store's bathroom. About 100 people were evacuated from the store and apartments above it, and the street was closed to traffic, Gittens said.

The SFPD bomb squad confirmed it was definitely an explosive device, reports Manuel Ramos of CBS Station KPIX-TV. A small charge was set off to disarm it.

Police said the bomb was powerful enough to seriously injure or kill someone if it had exploded.

The store reopened Tuesday, but the restroom remained closed.

In 2003, police said the windows of 17 Starbucks stores were clouded with glue and some of the door locks were jammed. Vandals also posted phony notices purporting to be from Starbucks management announcing the company's intention to abandon some of their San Francisco stores to make room for more locally owned coffee houses.