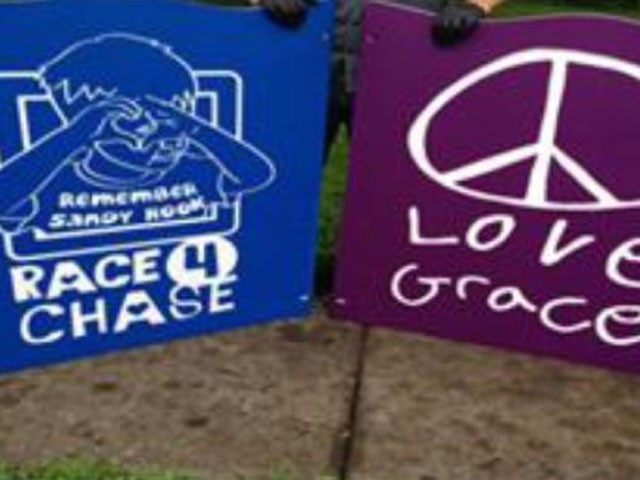 McLEAN, Va. - A Virginia man who believes the Sandy Hook school shootings were a hoax has been charged in the theft of two memorial signs in New Jersey and Connecticut dedicated to victims of those shootings, police said Friday.

Andrew Truelove, 28, who was renting a room in Herndon, has been charged in Fairfax County with possession of stolen property, Herndon police said.

Police say the blue and purple vinyl signs, one depicting a peace symbol, were stolen from playgrounds in Mystic, Conn., and Mantoloking, N.J. They were dedicated, respectively, to Grace McDonnell and Chase Kowalski, two of the 20 first-graders killed in the 2012 massacre.

"It's hard to explain the 'why' because from our perspective it doesn't appear rational," DeBoard said.

After the Mystic sign was stolen, a man called the McDonnell family to taunt them, claiming responsibility for the theft and claiming the shootings were a hoax.

Well-wishers in Connecticut responded to the theft by putting up dozens of handmade signs, many with depictions of hearts and peace signs.

DeBoard said Truelove has a history of criminal behavior involving kids and that he is banned from school property in Fairfax County. Court records show a variety of charges against him in recent years, including trespassing, disorderly conduct and destruction of property.

A lawyer who is representing him in an ongoing, unrelated case, Suzanne Hruby, did not return a phone message left late Friday afternoon.

Truelove was being held in the Fairfax County jail. DeBoard said grand larceny charges are pending against him in Connecticut and New Jersey.

Herndon police said they acted on a tip they received from police in Stonington, Conn. earlier in the week.