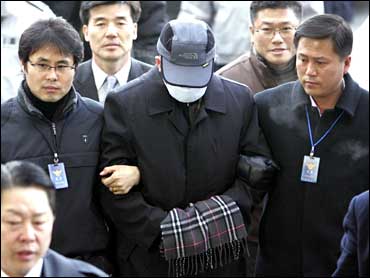 A 69-year-old man upset over a land dispute has admitted starting the fire in Seoul that destroyed a 14th-century gate considered one of South Korea's most treasured landmarks, police said Tuesday.

The suspect in the blaze at Namdaemun gate was arrested late Monday on Ganghwa Island, west of Seoul, and was questioned overnight at police headquarters in the capital. The man, identified only by his family name Chae, spoke briefly with reporters Tuesday while being escorted from police headquarters to the district office handling the case.

"I cannot say enough how sorry I am, to my children and the public," said the suspect, wearing a white mask and hat in an attempt to hide his identity.

The fire broke out Sunday night and burned down the wooden structure at the top of the Namdaemun gate, which once formed part of a wall that encircled the South Korean capital. The structure collapsed after hundreds of firefighters failed to control the blaze.

Police said the suspect had cased the crime scene in July and December last year. On Sunday, he poured a bottle of paint thinner on the floor of the wooden structure before setting it on fire with a disposable lighter, district police Chief Kim Young-soo said at a news conference.

Police found a can of paint thinner and leather gloves at the house of Chae's ex-wife on Ganghwa Island, Kim said.

He said the suspect had complained about a land dispute with a development company, saying that he did not get enough compensation from the developer for about 1,076 square feet in Gyeonggi province near Seoul.

The suspect had been charged in 2006 with setting fire to Changgyeong Palace in Seoul, which caused 4 million won (about $4,000) in damage. For that crime, he received a suspended sentence of 18 months in prison and was fined 13 million won (about $13,500), Kim said.

The suspect "committed the crime after nursing a grudge" over the fine and what he considered insufficient compensation for his land, Kim told reporters.

According to police, the suspect said he picked the 610-year-old landmark because it was easily accessible. He had initially planned to carry out an arson attack on another cultural landmark or the public transportation system, but called off those options because of heavy security and fears of a high death toll, police said.

The landmark was protected only by motion sensors at night, according to the Seoul Central Ward Office, which oversees the gate.

South Korean newspapers blasted the government for poor security and preservation of the cultural site. They also accused firefighters and other officials of inadequate initial responses.

"The burden of guilt weighs heavily on our shoulders as we let one of Korea's most precious cultural properties turn into a heap of ashes," read an editorial in the leading Dong-a Ilbo newspaper.

The two-tiered wooden structure had been renovated in the 1960s, when it was declared a top South Korean national treasure. The government built a plaza around the gate - officially known as Sungnyemun, or "The Gate of Exalted Ceremonies" - in 2005 and opened it to the public the following year for the first time in nearly a century.

The Cultural Heritage Administration said it would take at least three years and about 20 billion won ($21 million) to fully restore the monument.