Around the World For Free

• Alex On The Road Video Archive | 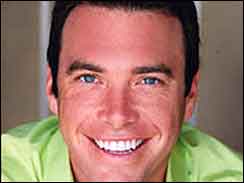 Alex Boylan has already taken one "trip of a lifetime" - he was the winner of the second season of CBS's "The Amazing Race." But not content to rest, especially on his laurels, Boylan is about to embark on another unique journey around the world - and this time he wants you to come along.

"Around the World For Free" is the name of his trip as well as the website that will track all of his movements via daily videos, blogs and message boards. Where is he going? How will he get there? What's his itinerary? Nothing is known about Alex's voyage - except that he'll make the trip without carrying a single cent.

Alex plans to "beg, borrow and deal" his way around the world over the next six months - but he'll also be relying on the kindness of strangers: us.

As you track Alex's progress on the "Around the World" website and watch his weekly reports for The Early Show, you'll find out where he's hoping to head to next. And as he heads there, he'll be looking for advice, a friendly local face, maybe even a place to stay for the night. Have you been to a small town along the way and know some interesting information, pass it on.

If you live near where Alex is headed, or know someone who is nearby, you can let Alex know on his site and help him on that leg of his trip. Have a friend there who needs to hire some help? Alex is looking for work. Have a cousin with a restaurant who might want to give Alex a meal? Alex would definitely like a free lunch. If he's in their neck of the woods, he'll likely stop by.

In short, Alex's trip is going to make traveling by the seat of your pants look like a first class option.

We'll be updating Early Show viewers every week on Alex's adventures - or you can drop by his site 24/7 to meet other members of Alex's online community and watch his daily video reports. This real-time reality show is the first of its kind.

"Without you, I will not make it," he says. So give Alex a hand, or at least give him some lunch.

The Early Show :How did you come up with the concept for "Around the World?"

Alex Boylan: The concept for "Around The World For Free" has been evolving since day one. The initial concept came when someone said it was easy for me to travel since I made money from winning "The Amazing Race." The truth is that I traveled much more when I was poor ... I remember saying I could make it around the world even if I started with no money.

From there, Zsolt Luka (the show's producer and the one who will be with Alex documenting the journey) and I were doing a documentary in El Salvador. When the crew was done for the day we would take one camera and the two of us would travel around shooting life in the area. We realized then we could capture the world with a small crew in a way that is not seen on TV.

From there, Burton Roberts (our other producer) was finishing a project the same time we finished our documentary. We all got together and came up with the interactive component that would take media entertainment to a level never seen before. So six months later ... here we are.

What is the idea or the point of the show?

This is a unique adventure travel show ... but unlike anything that has been done before.

The goal is simple: to see if one man could make it around the world for free using the guidance of the online audience. But there is more; this is about discovering corners of the planet never seen before and allowing the audience to direct where the show goes.

How did you prepare and or train for this endeavor?

Most of the preparation is on the technical level. No one could have done this show a year ago ... we are literally pushing the envelope of real-time interactive entertainment to a level never seen before. From the camera gear to satellite terminals to editing on the fly. We believe this is the first daily online, interactive travel show where the audience gets to guide and direct us from day one.

Are you nervous or excited?

Absolutely, I'm nervous ... we have given the show to the audience, so after launch I literally don't know where I'm going to sleep that night. But this has been a long time coming so I definitely just want to get it on!!

This is clearly an adventure for you, what do you think the public will get out of it?

The public gets a few things...

1. This is the first show that they can be part of. Lets say someone has this crazy job that they would love to show the world. They could invite me to join them for the day and it will be featured in the series in somewhat real time. Or, if they have a place for me to stay, I can crash on their couch and they are in that episode of the show.

2. People in this world are only separated by six degrees ... Let's say someone hasn't seen a long lost relative in years ... they can connect through the show with me passing through.

3. Also, our online platform at aroundtheworldforfree.com is a social networking hub for alike travelers to get together and post picture/videos and stories of travel destinations around the world. They can connect with each other and share stories or offer advice for destinations all over.

Why are you so passionate about travel?

I have been blessed from an early age to see the world. I strongly believe we live in a world of complete misconception of foreign lands. All we hear about are the bad things, but people are generally good and we all need to know we are all in this together. We hope this show will be a humble bridge connecting people around the world.

What are the rules?

I start off with no money and a backpack of the bare essentials and head off around the world with the audience as my guide. Our plan is to head south to South America but how we get there and what we do along the way is up to the audience. But remember this is about the beating heart of humanity ... NOT getting pimped out along the way. This is about real walks of life around the world.

What will you be taking with you?

Just the bare essentials: pants/shorts/shirts/toothbrush/etc - and A LOT of production equipment.

Who will be with you?

Zsolt Luka will be traveling with me...he is one of the producers and the man documenting everything. The benefit of having such a small crew is to be able to have access to places that a big crew could never get to.

One more thing I'd like to stress is the social networking aspect of the production. Through the site, aroundtheworldforfree.com, people can upload their own media, pictures, videos, and audio, and pinpoint on a map where that media came from. Then, through the mapping technology, people can search for media anywhere around the world and connect with people through the site. So even after my journey is over, there will be so much user-generated content that people will still have motivation to go to aroundtheworldforfree.com. We are creating a platform that will facilitate the interaction of adventure-minded travelers and enable them to share their stories.