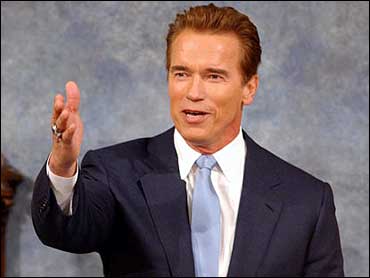 The speech, delivered to a worldwide television audience as well as a joint session of the California Legislature, sets the aggressive legislative agenda for the coming year for the new administration as well as a turning point in the transition of the Hollywood idol into the political leader of the nation's most populous state.

"I am optimistic about our state," Schwarzenegger said. "This good news is that the spending crisis forces us to bring badly needed reform to government."

Elected in California's historic recall election in October, Schwarzenegger takes over at a critical juncture. California has an existing deficit of close to $15 billion and although voters will be asked to borrow the money needed to pay off that debt — Schwarzenegger also faces a new deficit of at least $14 billion next year.

While Schwarzenegger didn't detail his budget plan, to be released Friday, he prepared the state for cuts that will hit all levels of government. And he asked voters to approve the $15 billion bond on the March ballot.

"The alternative is economic chaos," he said.

As part of improving the business climate, Schwarzenegger called for "real" reform of the workers' compensation insurance system. If he doesn't get such a plan by March 1, he is "prepared to take my workers' comp solution to the people. It will be on the November ballot."

Minutes before Schwarzenegger's speech, more than 500 people rallied outside the capitol.

They were up in arms over the governor's proposed legislation of an in-home caretaker program which provides help to low-income families with disabilities, reports CBS News Correspondent Chris Lawrence.

"If I didn't have my IHSS worker, I would not be able to go to work 40 hours a week. I would be stuck in a nursing home," says Nancy Hall, a protester.

During his campaign, Schwarzenegger promised to find billions of dollars in waste, but so far he hasn't found any he's acknowledged publicly. On Tuesday he announced the creation of a commission to find where state government is duplicative and wasteful.

"The executive branch of this government is a mastodon frozen in time and about as responsive," Schwarzenegger said. "This is not the fault of our public servants, but of the system."

The commission will include lawmakers, business representatives and bureaucrats knowledgeable of the state system, and will report back to him by the end of year.

On the budget, the target of most cuts is expected to be public health and welfare programs. The governor has already released a list of about $4 billion in spending reductions he wants including changes to the state health insurance program that costs taxpayers about $10 billion annually.

"We have no choice but to cut spending, which is what caused the crisis in the first place," Schwarzenegger said. "These are cuts that will challenge us all. But we cannot give what we do not have. If we continue spending and don't make cuts, California will be bankrupt."

In a response following the speech, Assembly Speaker Herb Wesson said Democratic lawmakers will cooperate with Schwarzenegger, "but we will not capitulate to this governor on issues of core Democratic values."

"We will do everything we can to make California more competitive," said Wesson, D-Culver City. "We will try to create new jobs without rolling back workers' protections because we must have them both."

Without offering specifics, Schwarzenegger said he wanted to give local education officials more control over how they spend state money.

He also said he would work to repeal a union-backed law that prohibits school districts from entering contracts for meals, busing, maintenance and other services, if it the contract would displace school employees.

That law, by Sen. Richard Alarcon, D-Van Nuys, requires that districts prove that outside vendors will save money, and it requires that the contractor's wages don't undercut school district pay rates.

The governor's tone was generally upbeat and shied away from any controversial areas that might ignite partisan bickering. He made a passing reference to the idea that Republicans and Democrats fashioned a budget agreement last month, noting that he wants to work with both parties.

He also followed up on a campaign promise to negotiate with Indian tribes for a share of gambling profits, saying he would soon announce his negotiator to work with tribes so that "California receives its fair share of gaming revenues."

Some observers say the speech marks a major turning point in Schwarzenegger's career.

"All the rehearsals are over," he said. "This is opening night."