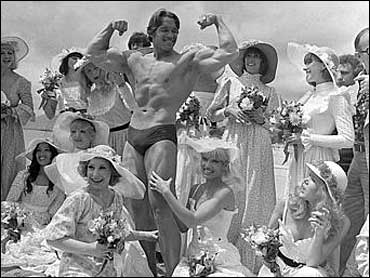 Gov. Arnold Schwarzenegger, who has acknowledged using steroids during his years as a champion body builder, said he does not regret using the performance-enhancing drugs.

In an interview to be broadcast Sunday, the Austrian-born former actor told George Stephanopoulos: "I have no regrets about it, because at that time, it was something new that came on the market, and we went to the doctor and did it under doctors' supervision."

Schwarzenegger has acknowledged taking steroids, but pointed out that they were legal at the time.

"We were experimenting with it. It was a new thing. So you can't roll the clock back and say, 'Now I would change my mind on this,'" he said.

The former seven-time Mr. Olympia said he would not encourage drug use because it sent the wrong message to children. But he said he had no problem with athletes taking nutritional supplements and other legal substances to improve their performance.