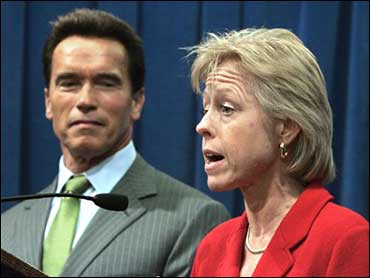 Republican Governor Arnold Schwarzenegger appointed a longtime Democratic activist as his chief of staff Wednesday, the first step to shaking up his administration after losing political capital on referendums voters rejected earlier this month.

The move to replace Patricia Clarey had been widely anticipated since voters defeated all four of the governor's "year of reform" measures Nov. 8. But the announcement of California Public Utilities Commissioner Susan Kennedy as Clarey's replacement caught many Republicans and Democrats off-guard.

Kennedy was cabinet secretary to former Democratic Governor Gray Davis, who was ousted in a 2003 recall election that brought Schwarzenegger to power. She also is a former director of an abortion rights group and becomes one of the highest-profile gays in state politics, making her appointment a potentially risky one for the governor.

"She's willing to set her Democratic philosophy aside and do the job and do my vision — to be able to work together with Democrats and Republicans," Schwarzenegger said during a news conference at the Capitol.

Some political analysts, however, think the move puts Schwarzenegger in a tough spot.

"This makes Schwarzenegger a man without a country," said Republican strategist Dave Gilliard, who helped run the campaign to recall Davis. "The Democrats will never accept him or embrace him, and now he's breaking with his base. I don't understand it."

Schwarzenegger has lost support over the past year from most Democrats and independent voters, relying increasingly on conservatives to carry his message. Kennedy's appointment could be a way to regain the bipartisan image he crafted during the recall election but also jeopardizes his standing among conservatives, his only reliable supporters.

Even some leading Democrats appeared puzzled by the appointment.

"Any move by the governor to embrace Democratic values is good news for the state," said Steve Maviglio, spokesman for Assembly Speaker Fabian Nunez, a Democrat. "However, it leaves many Democrats, as well as Republicans, wondering if he has any core values at all."

The move comes three weeks after the governor suffered a sweeping loss in a special election showdown he orchestrated against Democrats and their union supporters.

Voters rejected all eight of the initiatives on the ballot, including the four promoted by Schwarzenegger. They would have capped state spending, changed the way legislative districts are drawn, reformed teacher tenure rules and restricted the ability of public employee unions to raise money for political purposes.

Clarey, a Republican and deputy chief of staff for former Gov. Pete Wilson, announced in a letter sent Wednesday to Schwarzenegger that she would resign at the start of the new year.

"It's been quite a ride," she said in the letter, which was released by the governor's staff. "... While much remains to be done, I am gratified at the success we have realized. California is on a much better path thanks to your leadership."

Schwarzenegger hinted at further staff changes. "People after a certain amount of time in this job, working here at the Capitol, they get burned out and want to move on," he said.