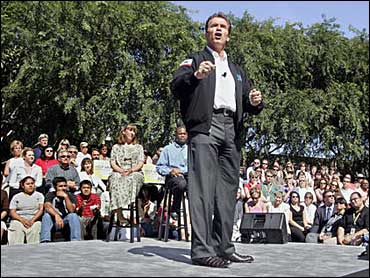 Gov. Arnold Schwarzenegger said Tuesday the nation's policy on preventing illegal immigration is too lax, telling a group of newspaper publishers the United States needs to "close the borders."

"Close the borders in California and all across Mexico and in the United States," Schwarzenegger said at the annual meeting of the Newspaper Association of America. "Because I think it is just unfair to have all those people coming across, have the borders open the way it is, and have this kind of lax situation."

Schwarzenegger's remarks were later clarified by his spokeswoman, who said the governor supports greater security along the nation's borders but was not calling for their complete closure.

"The governor has talked before about the need to ensure that immigrants are put on a path toward fully participating in California's economy," spokeswoman Margita Thompson said. "But he feels they need to enter the country the right way, and must not undermine important security issues. He feels that the border needs to be secure."

"This is a very important debate. I think it's necessary that we solve the problems rather than try to run the other way. It's a hot issue," he said.

It's not the first time Schwarzenegger, who emigrated from Austria as a young man, has become entangled in the emotional debate surrounding illegal immigration.

Schwarzenegger has been repeatedly grilled on why he voted for a 1994 ballot measure to deny many basic services to illegal immigrants. Shortly after entering office, he derailed a law that would have allowed illegal immigrants to apply for driver's licenses.

In February, Schwarzenegger endorsed congressional legislation authorizing the construction of a fence along California's border with Mexico.