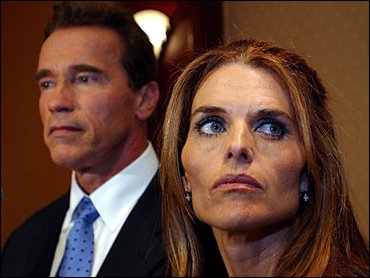 As the number of women claiming they were groped by Arnold Schwarzenegger grew to 15 Sunday, the actor headed for a campaign march in Sacramento, while Gov. Gray Davis signed a law making California the largest state to require employer-paid health care.

A Knight Ridder poll released late Saturday found support for recalling Democrat Davis might be slipping, although 54 percent favored removing him while 41 percent were opposed. Republican Schwarzenegger continued to lead among potential replacements in Tuesday's election.

Davis, in Los Angeles on Sunday, signed a law he predicted will provide health insurance to nearly 1.1 million working Californians who do not currently receive job-based coverage. Though small businesses are exempted, the measure requires most employers to pay for their employees' health care.

"Today we take a bold step to reform health care," Davis said before signing the bill at a ceremony attended by the Rev. Jesse Jackson, actor Danny Glover and labor leaders.

The latest group included an unidentified 51-year-old woman who said Schwarzenegger pinned her to him and spanked her repeatedly three years ago at a West Los Angeles post-production studio.

Three other women named by the Times said Schwarzenegger fondled them in separate incidents outside a Venice gym in the mid 1980s, at a bar in the late 1970s and on the set of the movie "Predator" in 1986.

"The behavior that has been alleged is reprehensible. It is disgraceful," said Republican State Senator and gubernatorial canidate Tom McClintock.

Schwarzenegger spokesman Sean Walsh dismissed the accounts of three of the women as untrue. He said the actor had no recollection of the alleged gym incident.

The Times reported Thursday that six women claimed he groped or sexually harassed them between 1975 and 2000. After the story was published, similar allegations surfaced from five other women, including two who said the actor harassed them on the set of the 1988 film "Twins."

"This is campaign trickery and it is dirty campaigning," he said in an interviewed aired on ABC's "This Week" Sunday. "Like, for instance, I despise anything and everything that Hitler stands for."

Schwarzenegger also denied the Times' "Twins" story as "absolutely not true": "It's just mean-spirited, and it's just trying to derail my campaign."

He stopped short of denying all the women's accounts, but said none of the women told him at the time that, "You went over the line now."

Davis said the latest allegations indicate "serious problems" with Schwarzenegger's behavior and questioned his ability to govern. He said Schwarzenegger has offered only partial explanations.

"Are all 15 women and their families lying?" Davis told reporters during brief remarks made during the bill-signing ceremony.

Though the Knight Ridder poll, conducted Wednesday through Saturday, found a majority of voters support recalling Davis, the percentage of people saying they would definitely vote to oust Davis declined each day the poll was conducted, from 52 percent Wednesday to 44 percent Saturday. Those saying they either were probably going to vote for the recall or were unsure how to vote increased from 10 percent Wednesday to 24 percent Saturday.

If Davis is removed, the poll showed Schwarzenegger leading among potential replacements with 36 percent support, to 29 percent for Democratic Lt. Gov. Cruz Bustamante.

Such polling results led to a new anti-recall ad in which U.S. Sen. Dianne Feinstein says, "This recall is turning around." The new ad from Californians Against the Costly Recall is set to begin airing in major markets Monday.

Though she names neither Davis nor Schwarzenegger, the senator cites the recent "serious allegations" against Schwarzenegger while asserting that, "People are beginning to see how unfair it (the recall) is, and how harmful it is to California's economy and to our people."

But those who gathered at a Schwarzenegger rally at the Capitol called the latest round of accusations a last-minute sideshow aimed at derailing his campaign.

Stephanie Minietti, 55, said she wasn't paying attention to the sex allegations. "It's totally meaningless," she said. "If anything, it's probably helping him."