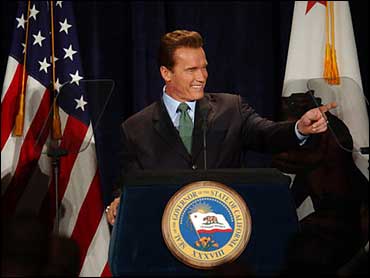 Schwarzenegger told a cheering crowd at the state Republican convention that "in San Francisco, the courts are dropping the ball."

"It's time for the city to stop traveling down this dangerous path of ignoring the rule of law. That's my message to San Francisco," he said Friday night.

Schwarzenegger's directive to Attorney General Bill Lockyer was prompted in part by a judge's decision not to impose a temporary restraining order that would have halted San Francisco's weeklong parade of 3,175 same-sex weddings, said Rob Stutzman, Schwarzenegger's communications director.

A spokeswoman for Lockyer told the Los Angeles Times that the attorney general's office planned to seek a judgment soon declaring the city's action a violation of state law, but said Schwarzenegger had no authority over the elected Democrat.

"The truth is, thousands of people are involved in loving relationships and having them recognized for the first time," Ragone said. "We urge the governor to meet with some of the couples because what's happening is both lawful and loving."

Earlier Friday, Judge Ronald Evans Quidachay denied the Campaign for California Families' request for a temporary restraining order, saying it failed to prove same-sex weddings would cause irreparable harm. In a separate case, another judge declined to order an immediate stop to the marriages Tuesday.

But as CBS News Correspondent Vince Gonzales reports, arguments that might win over a California court may not work in the rest of the country -- where polls show a majority favor banning gay marriage.

"What's happening here in San Francisco will indeed awake the sleeping giant of the majority of Americans who believe marriage is one man and one woman," said Matthew Staver, president of the conservative Liberty Counsel.

The Campaign for California Families argued Friday that the weddings harmed all the Californians who voted in 2000 for Proposition 22, which defined marriage as between a man and a woman.

The judge suggested that the rights of the gay and lesbian couples appeared to be more substantial.

Quidachay consolidated the Campaign for California Families' lawsuit against the city with one filed by another conservative group, and told lawyers for both sides to work out between themselves when the next hearing would be held.

Mathew Staver, a lawyer representing the Campaign for California Families, said he believes the court ultimately will find that Newsom acted illegally when he began allowing gay marriages last week.

"He can't decide to grant same-sex marriage licenses any more than he can declare war against a foreign country," Staver said.

But chief deputy city attorney Therese Stewart said the failure of conservative opponents to win emergency injunctions demonstrates that the city has a strong case.

"Both judges really recognized there is nobody who is hurt by allowing gay people to marry," Stewart said.

Newsom remained defiant before the ruling, officiating at the wedding of one of California's most prominent lesbian politicians inside his offices at City Hall.

"Like the wrenching debate over abortion, the fight over gay marriage may never end. Same-sex marriage involves as its subsets just about every top-shelf topic -- politics, religion, sex, family, money -- that renders people unable to consider different points of view. And you can just tell from the tone and tenor of the debate that neither side in the fight is going to be willing to accept compromise anytime soon," says Cohen.

About 25 anti-gay-marriage protesters later blocked the door of the county clerk's office, lying down in front of the line and singing religious songs. Gays and lesbians responded by belting out "The Star-Spangled Banner" until sheriff's deputies escorted the protesters out. No arrests were made.

While defending its new marriage policy in court, the city also is suing the state, challenging its gay-marriage ban. The city contends the ban violates the equal protection clause of the California Constitution.

In Bernalillo, N.M., dozens of gay and lesbian couples arrived to get married Friday after a county clerk announced she would grant marriage licenses to same-sex couples.

In Washington, CBS News Correspondent Bill Plante reports that although President Bush has already said he believes marriage should be between a man and a woman only, many conservatives are frustrated that he is not more vocal on the subject.

White House political strategist Karl Rove has flat-out promised conservatives that the President will endorse a constitutional amendment -- even though Mr. Bush himself has only hinted at it so far.

Plante says it's likely Mr. Bush is saving his ammunition for the presidential campaign later this year.

The feeling has been that the President will get more bang for the buck by waiting until the democrats are off the front page and his own campaign is in high gear, Plante notes.