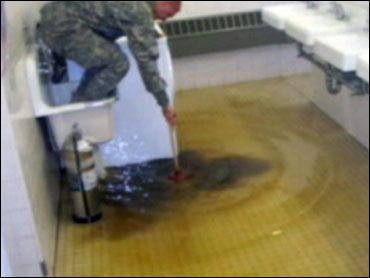 The Secretary of the Army admitted Wednesday the conditions at Fort Bragg in North Carolina are unacceptable - and promised the barracks will be fixed up. As CBS News National Security correspondent David Martin reports, the announcement came after the shoddy conditions were exposed in a video posted on the Internet.

A YouTube video shows soldiers who spent 15 long, hard, difficult months in some of the most remote dangerous areas of the mountains of Afghanistan.

But when they came home, what they returned to outraged Sgt. Jeff Frawly's father, Ed.

Frawly narrated photos of the conditions his son and the other soldiers from the 82nd Airborne found in their barracks at Fort Bragg.

As for the showers, the YouTube video says: "That dark spot behind the peeled paint is mold. This is right over the head of where the soldiers stand when they take their showers."

And Sgt. Frawley's father was mad as hell.

Army officials said Tuesday they are inspecting every barracks building worldwide to see whether plumbing and other problems revealed at Fort Bragg are widespread.

Brig. Gen. Dennis Rogers, who is responsible for maintaining barracks throughout the Army, told reporters at the Pentagon that most inspections were done last weekend but he had not seen final results.

While not providing specifics about problems discovered during the weekend inspections, Rogers indicated some deficiencies were corrected. In cases where extensive repairs are deemed necessary, the soldiers in that housing would be moved elsewhere until the fixes are completed, he added.

Rogers said it was too soon to know whether the Fort Bragg problem was an isolated incident. He acknowledged the revelations from the video shot by Frawly showing poor conditions such as mold inside the barracks, peeling interior paint and a bathroom drain plugged with sewage.

Frawly said he was disgusted by the conditions that greeted his son and the rest of his 82nd Airborne unit that returned on April 7-8 after a 15-month tour of duty in Afghanistan.

"We let our soldiers down, and that's not like us," Rogers told reporters. "That's not how we want America's sons and daughters to live. There's no good excuse for what happened."

He said the problems in that building have been fixed and that a final paint job is in the works. It is one of 24 barracks at Fort Bragg that were built in the 1950s and are scheduled for demolition by 2013. The barracks singled out by Frawley had been remodeled in April 2006, Rogers said.

Rogers said the Army's standard procedure is to inspect a barracks building to verify that it meets Army standards before it is occupied by soldiers returning from an overseas deployment. For reasons he was unable to explain, that apparently did not happen in the Fort Bragg incident.

A spokesman for Fort Bragg, Tom McCollum, told the same group of reporters that the post, which is one of the Army's largest with a population of 51,000 soldiers - including more than 12,000 who live on the post - is saddled with 1950s-vintage housing that is not popular with soldiers.

"Are soldiers happy with living in the Korean War-era barracks? No," McCollum said. They do not meet the expectations of today's troops, although the Army has done what it can to improve living conditions, McCollum said, speaking by telephone from Fort Bragg.

"Today, no matter how hard we try, we can't put enough lipstick on this pig to make it more pretty," the spokesman said. "So are there soldiers complaining? Yeah." He said they've been complaining for decades.

Some lawmakers are calling for Congress to investigate.

Sen. Hillary Rodham Clinton of New York, who is seeking the Democratic presidential nomination, told The Fayetteville Observer that she has asked the Senate Armed Services Committee to hold a hearing on Fort Bragg and the broader issue of living conditions for returning troops, the paper said on its Web site Tuesday night.