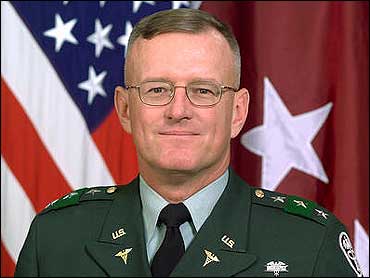 Kiley, who headed Walter Reed from 2002 to 2004, has been a lightning rod for criticism over conditions at the Army's premier medical facility, including during congressional hearings last week. Soldiers and their families have complained about substandard living conditions and bureaucratic delays at the hospital overwhelmed with wounded from the wars in Iraq and Afghanistan.

Coming three weeks after the revelations of shoddy care at Walter Reed, the wonder is why it took so long, reports CBS News national security correspondent David Martin, especially when Kiley continued to downplay the problems and said dilapidated conditions in a building where outpatients lived were not his responsibility.

"We must move quickly to fill this position — this leader will have a key role in moving the way forward in meeting the needs of our wounded warriors," Acting Secretary of the Army Pete Geren said in a statement.

Geren asked Kiley to retire, said a senior defense official speaking on condition of anonymity because he was not authorized to speak on the record. Defense Secretary Robert Gates was not involved in the decision to ask Kiley to retire, the official said.

The White House said it was not involved in Kiley's forced retirement, reports CBS News correspondent Peter Maer. Deputy Press Secretary Dana Perino told CBS News, "We support the accountability measures taken by the Department of Defense and the Army, and to quickly address health issues for our returning servicemen and women."

Kiley's removal underscored how the fallout over Walter Reed's shoddy conditions has yet to subside. Instead, the controversy has mushroomed into questions about how wounded soldiers and veterans are treated throughout the medical systems run by the military and the Department of Veterans Affairs and has become a major preoccupation of a Bush administration already struggling to defend the unpopular war in Iraq.

"I submitted my retirement because I think it is in the best interest of the Army," Kiley said in Monday's Army statement. He said he wanted to allow officials to "focus completely on the way ahead."

Amid the focus on Walter Reed, Veterans Affairs Secretary Jim Nicholson on Monday ordered his department's clinics to provide details about their physical condition by next week to determine if squalid conditions found at Walter Reed exist elsewhere.

Nicholson has been under pressure to reduce claims backlogs and improve coordination at the VA's vast network of 1,400 hospitals and clinics, which provide supplemental care and rehabilitation to 5.8 million veterans.

The conditions at Walter Reed were detailed last month by The Washington Post. Since then, Gates has forced Army Secretary Francis Harvey to resign and Maj. Gen. George W. Weightman, who was in charge of Walter Reed since August 2006, was ousted from his post.

According to a new report by the Army Inspector General, the problems include inconsistent policies, antiquated databases and poorly trained personnel, reports Martin. In other words, the system needed an overhaul even before it was overwhelmed by the thousands of wounded from Iraq.

In a briefing Thursday for reporters at the medical center, top Army officials said they have moved to fix some of the problems at Walter Reed.

Army Vice Chief of Staff Gen. Richard Cody said that officials have added caseworkers, financial specialists and others to work with soldiers' families on problems they have related to the injuries such as getting loans or help with income taxes.

A number of additional investigations have been ordered.

President Bush has appointed a bipartisan commission to investigate problems at the nation's military and veteran hospitals, and separate reviews are under way by the Pentagon, the Army and an interagency task force led by Nicholson.