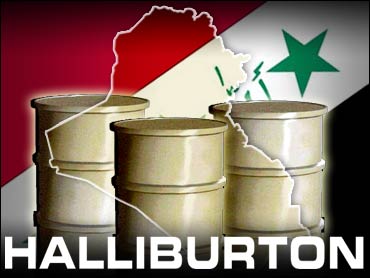 The Army apparently has sided with Halliburton in a dispute over the company's charges for fuel delivered to Iraq.

The Army Corps of Engineers official overseeing the contract wrote to superiors last month that Halliburton followed correct procedures and got the best price for the gasoline supplied by a Kuwaiti company. But a corps spokesman said Tuesday the corps had not totally exonerated Vice President Dick Cheney's former company of allegations of overcharging.

Pentagon auditors have questioned whether Halliburton subsidiary KBR overcharged the Army by more than $60 million for gasoline it shipped from Kuwait to Iraq. Halliburton has denied wrongdoing and said it saved the Army more than $100 million by suggesting buying some of the fuel for Iraq more cheaply in Turkey.

The decision to back the company's assertion on the fuel-supply issue was first reported in Tuesday's editions of The Wall Street Journal.

The fuel from Turkey cost more than $1 per gallon less than the fuel KBR bought from the Kuwaiti supplier, the Altanmia Marketing Co. Halliburton says it had no choice but to pay the higher price because Altanmia was the only fuel supplier approved by the Kuwaiti government.

"We believe KBR delivered fuel to Iraq at the best value, the best price and the best terms," Halliburton spokeswoman Wendy Hall said.

The Defense Contract Audit Agency said Tuesday it was waiting for Army contract managers to certify that Halliburton paid the best price for the fuel. The agency will issue its ruling on the issue after getting the information from the Army, the DCAA said in a statement.

While the Army hasn't told the Pentagon auditors of its findings, a contract manager backed Halliburton's arguments in a memo to his boss Dec. 19.

Contracting officer Gordon Sumner wrote that KBR "obtained adequate price competition" for the fuel and "continued to negotiate the best price possible." Sumner wrote that Halliburton had tried to get a cheaper price but Altanmia and the Kuwaiti government refused.

Sumner's memo recommended that Halliburton's future deliveries of Kuwaiti gasoline and kerosene be exempt from U.S. rules requiring the submission of cost information. Kuwaiti law prevents the disclosure of such information, Sumner wrote.

Auditors from the DCAA said KBR may have overcharged the Army by $61 million for fuel it bought from Altanmia and delivered into Iraq between April and October. President Bush said last month he expected Halliburton to repay the money if it was found guilty of overcharging.

Critics say Halliburton had no reason to hold down costs because of the way the Army pays for the company's services. The contract guarantees Halliburton will be reimbursed for all of its expenses, plus an additional profit equal to between 2 percent and 7 percent of those costs.

In other words, if Halliburton overcharged by $61 million, its profits from that overcharging would be between $1.2 million and $4.3 million.

Democrats have seized on the dispute to criticize the Bush administration for its ties to Halliburton and have called for more investigations of the company. Cheney quit as head of the company in 2000 to become Mr. Bush's running mate and Halliburton executives donated thousands of dollars to Mr. Bush's campaign.

"Instead of cutting off the contract and launching an investigation into this sweetheart contract, Halliburton gets a pass," Sen. Frank Lautenberg, D-N.J., said Tuesday. "It has become clear that taking care of corporate cronies at the expense of the public's trust is the priority of the Bush-Cheney administration."

Halliburton continues to supply fuel to Iraq's civilian market under the Army contract while another Pentagon agency, the Defense Energy Support Center, prepares to take over that job. The Army hopes to replace Halliburton's contract to rebuild Iraq's oil industry through a competitive bid process which should be complete later this spring.

In afternoon trading on the New York Stock Exchange, Halliburton shares were up 54 cents at $26.66.