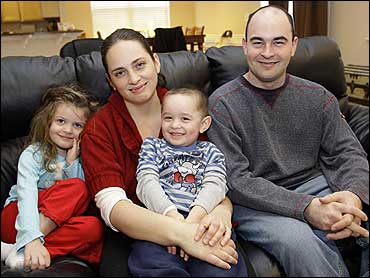 A North Carolina mother who reported for Army duty with her two young children in tow is waiting to see what happens next.

Lisa Pagan, who was recalled to the Army four years after being honorably discharged, drove nearly 400 miles and braved a Southeastern winter storm to report for duty Sunday at Fort Benning, Ga.

She says she has no one to take care of son Eric and daughter Elizabeth, so she brought them with her. She has reserved a motel room for a week and doesn't plan to stay in the barracks.

"Them being away from me is not an option," she said.

Pagan is among thousands of former service members who have left active duty since the Sept. 11 attacks, only to be recalled to service. They're not in training, they're not getting a Defense Department salary, but as long as they have time left on their original enlistment contracts, they're on "individual ready reserve" status - eligible to be recalled at any time.

Pagan filed several appeals, arguing that because her husband travels for business, no one else can take care of her kids. All were rejected, leaving Pagan to choose between deploying to Iraq and abandoning her family, or refusing her orders and potentially facing charges.

Pagan, whose job was truck driving during her first military stint, said it would likely be Monday morning before she knows what happens next.

"I think our ultimate goal is to be honorably discharged," she said.

Master Sgt. Keith O'Donnell, an Army spokesman in St. Louis, said earlier that the commander at Fort Benning will decide how to handle the situation.

"The Army tries to look at the whole picture and they definitely don't want to do anything that jeopardizes the family or jeopardizes the children," O'Donnell said. "At the same time, these are individuals who made obligations and commitments to the country."

Of the 25,000 individual ready reserve troops recalled since September 2001, more than 7,500 have been granted deferments or exemptions, O'Donnell said. About 1,000 have failed to report. O'Donnell most of those cases are still under investigation, while 360 soldiers have been separated from the Army either through "other than honorable" discharges or general discharges.

O'Donnell said Pagan isn't likely to face charges, since none of the individual ready reserve soldiers who have failed to report faced a court-martial.

Pagan's husband, Travis, is staying behind in their home in Davidson to continue his job.

"He's very supportive. He feels the same way I do," Pagan said. "He never thought I would be called back to begin with."

In a telephone interview Sunday night, she said she arrived at Fort Benning after a scary, snowy drive.

Of her children, she said, "So far they're doing OK."